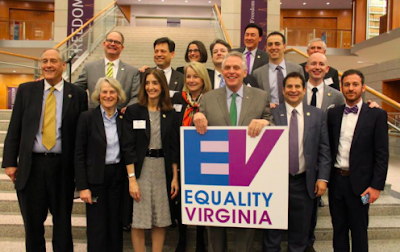 As with Republicans at the national level, the Virginia Republican Party is forever prostituting itself to Christofascists - led in Virginia by The Family Foundation, a hate group in all but formal designation - and seeking to legalize anti-LGBT discrimination.  True, Bob Marshall's "bath room bill" was killed by Republicans in committee, but that was more over concern for the economic backlash that might occur given the experience of neighboring North Carolina.  But true to form, a falsely named and unnecessary "religious freedom" bill has passed the Virginia General Assembly on a party line vote that would allow legalized discrimination against LGBT Virginians.  Thankfully, Gov. Terry McAuliffe has vowed to veto the bill.  GayRVA has details.  Here are highlights:

Virginia Gov. Terry McAuliffe vowed to veto any bill that discriminates against LGBTQ people at a reception hosted Tuesday night by Equality Virginia.

McAuliffe has vetoed 71 bills during his two years as governor, none of which have been overturned.

“It’s not about doing the most vetoes of any governor in Virginia history,” McAuliffe said. “We’re stopping people from doing things that discriminate against people’s basic rights.”

Democrats criticized Republicans for approving SB 1324, which passed the Senate on a 21-19 party-line vote Tuesday.

“Discrimination on the basis of sexual orientation or gender identity has absolutely no place in the commonwealth, and I am disappointed that a Republican-majority in the Senate approved SB 1324 today,” said Lt. Gov. Ralph Northam, who is seeking the Democratic nomination for governor this year.

“I recently took a seven-city tour across the commonwealth that ended in Salem, where I was proud to welcome the NCAA soccer tournament. That championship was relocated from North Carolina, as was the NBA All-Star game and major businesses. To be economically competitive, we have to be open and welcoming to all. I will continue to advocate for equality for all.”

“The only way we’re going to get fair treatment, gay and lesbian people, is to let the people speak out. And it’s not going to be through this gerrymandering system that we have here. The system is rigged – it truly is,” Sickles said.

Gerrymandering has allowed Republicans to maintain a disproportionate number of seats in the General Assembly and has allowed backward rural areas to have far too much say in public policy in Virginia.  Both gerrymandering and LGBT discrimination need to end.
Posted by Michael-in-Norfolk at Thursday, February 09, 2017