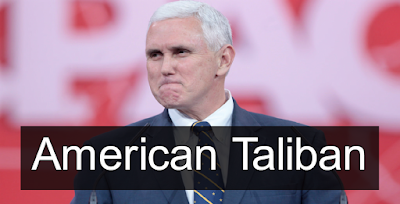 Der Fuhrer is not the only one in his regime who is challenged when it comes to truth and veracity (indeed, the question would seem to be whether there is anyone who isn't a pathological lair).  Which brings me to homophobe and gay hater extraordinaire, Mike Pence.  It is commonly assumed that Trump tapped Pence as his VP choice in order to pander to Christofascists with whom Trump met in June, 2016.  During that meeting, Trump made promises to the leaders of a veritable who's who of anti-gay zealots and religious extremists, none of which bode well for LGBT Americans. High on that list was the passage of legislation and/or executive orders that would grant Christofascists of all walks, in and outside of governmental positions, the right to openly discriminate against LGBT citizens - and others who do not subscribe to their claimed religious beliefs.  On Sunday, Pence, a man with a decades long history of animus towards LGBT citizens (including support for conversion therapy) dissembled on This Week as to the regimes plans to legalize anti-LGBT discrimination.  The Advocate has highlights:

“I think that’ll be the purview of the president,” Pence said when George Stephanopoulos asked him about the possibility of such an order on ABC’s This Week.

Last week a draft of an order with anti-LGBT language circulated in the media; it was first obtained by The Nation. It would allow businesses, nonprofits, and even government employees to discriminate, without repercussions, against anyone who offends certain religious beliefs. The beliefs include opposition to same-sex marriage, any sex outside marriage, transgender identity, and abortion.

White House spokesman Sean Spicer has said there are no plans for such an order right now but has said a variety of orders are always under consideration, therefore leaving the door open. LGBT and civil liberties groups have been quick to decry it, and constitutional scholars have said it likely is beyond the scope of what a president is allowed to do via executive order. But religious right activists are pushing it. It is similar to a pending piece of federal legislation, the First Amendment Defense Act, which Trump has said he would sign if it is passed by Congress.

Pence’s words may ring rather hollow, considering his long record of opposing LGBT rights, both as Indiana governor and earlier as a congressman. And given Trump’s opposition to marriage equality and support for the First Amendment Defense Act, he is not exactly an LGBT ally either.

Eliel Cruz, an LGBT rights and faith activist, told the Washington Blade, “The Trump administration will always choose the beliefs of anti-LGBT evangelicals over the dignity and rights of LGBT people.”