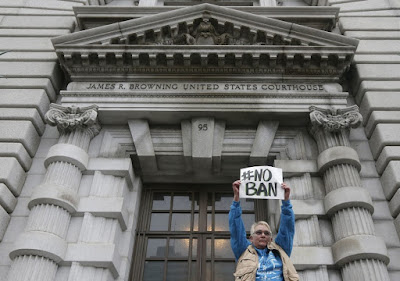 Conservative columnist Jennifer Rubin - although, I suspect Der Trumpenführer would describe her as an enemy of American security - continues on her quest to atone for years of apologizing from GOP misrule and misconduct that set the stage for the 2016 election results.  In a column she looks at the stinging rebuke dealt to the Trump/Pence regime by the United States Court of Appeals for the 9th Circuit.  Not only did the court refuse to reverse the stay of Der Trumpenführer's Muslim ban, but it did so in strong language and made it clear that the president is not above judicial review or Constitutional limits.   Rubin's column looks at not only the incompetence of the regime but the dangerous mindset of Der Trumpenführer who views himself above the law.  Here are column excerpts:

In a unanimous, 29-page opinion, three judges with the U.S. Court of Appeals for the 9th Circuit flatly rejected the government’s argument that the suspension of the order should be lifted immediately for national security reasons and forcefully asserted their ability to serve as a check on the president’s power.

The opinion tells us much about the hubris and sheer incompetence of the new administration as the court rebuked it at every turn, pointing to errors in law and lawyering.

The administration made the argument that the case was not even reviewable, despite ample precedent from the George W. Bush years. In its most memorable line of the opinion the judges held, “There is no precedent to support this claimed unreviewability, which runs contrary to the fundamental structure of our constitutional democracy.” . . . . Given the president’s recent public hectoring and threats to hold the court responsible for any terror attacks if it upheld the lower court’s order, the court had every reason to eviscerate the claim of what amounts to executive supremacy.

The executive order — drafted, we are told, during the campaign — was so sweeping and egregiously dismissive of constitutional niceties that the court made easy work of it. The most fatal flaw was the inclusion of green card holders, which the Department of Homeland Security apparently warned the White House not to include. This gave the court a significant group of people with due process rights who would be subject to presidential whim without any procedural recourse. Both green card holders here in the U.S. and those seeking to come back into the country were affected.

The court found that “the States have offered evidence of numerous statements by the President about his intent to implement a ‘Muslim ban.'” On this, Trump dug his own legal grave.

In then weighing the “irreparable injury” that might be done by staying the ban, the court observed that the administration provided “no evidence that any alien from any of the countries named in the Order has perpetrated a terrorist attack in the United States.” In biting criticism the court found, “Rather than present evidence to explain the need for the Executive Order, the Government has taken the position that we must not review its decision at all.” This too was a complete failure of lawyering.

The White House seemed to believe that issuing an executive order was no different than putting out a campaign white paper. The court to its credited reminded the administration that presidents have ample, but not unlimited power. Constitutional restraints still apply to the president, even on national security.

A more rational president who actually believed national security was at risk would heed the court’s directions, issue a narrower ban that would pass muster and roll that out with proper coordination. But Trump must “win” and can never accept error — even if his aides deserve some of the blame. He’ll persist, he says, to the Supreme Court (or perhaps first to an en banc review). If he truly believes that we are in peril, it is he who is endangering the country by choosing to leave the country with no travel ban whatsoever. And of course, with regard to real risks — radicalized Americans, lone wolves, etc. — the president is doing nothing, thereby leaving the country no safer than it was under his predecessor.

This is a humiliating defeat for the White House, revealing just how amateurish the president and his advisers are. The frightful part is that if they cannot handle a simple executive order, what makes anyone think they can handle far more difficult challenges?

Posted by Michael-in-Norfolk at Friday, February 10, 2017