Are Congressional Republicans Aiding Trump in Building an Autocracy? 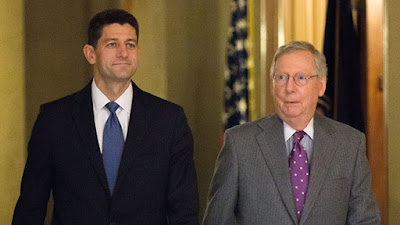 The batshit craziness continues to flow out of the White House with Der Trumpenführer lashing out at retailers that have either stop carrying his daughter's fashion line or relegating it to being relegated to being mixed in with other lines.  Meanwhile, the lies continue to flow from the lips of Der Trumpenführer and his minister of propaganda and so-called press secretary.  Do Congressional Republicans lift a finger to rein in a seemingly mentally ill head of their party?  Of course not. A very lengthy piece in Vox makes the case that Trump cannot become a dictator solely under his own power but rather needs the assistance of Congressional Republicans.  Since before Barack Obama assumed the office of president, Congressional Republicans have been derelict in performing their constitutional duties.  During Obama's turn, they obstructed the function of the federal government.  Now, they are sitting by as Trump wreaks havoc on a daily, if not hourly basis.   Here are article highlights:

So why, then, are we surrounded by articles worrying over America’s descent into fascism or autocracy? There are two reasons, and Trump is, by far, the less dangerous of them.

Trump has shown himself unconcerned with the norms of American democracy. He routinely proclaims elections rigged, facts false, the media crooked, and his opponents corrupt. During the campaign, he flouted basic traditions of transparency and threatened to jail his opponent. His tendencies toward nepotism, crony capitalism, and vengeance unnerve. His oft-stated admiration for authoritarians in other countries — including, but not limited to, Vladimir Putin — speaks to his yearning for power.

The picture resonates because it combines two forces many sense at work — Trump’s will to power and the fecklessness of the institutions meant to stop him — into one future everyone fears: autocracy in America.

[It] is not an autocracy. It is what we might call a partyocracy — a quasi-strongman leader empowered only because the independently elected legislators from his party empower him.

The judiciary, however, is not the branch of government with the most power or the most responsibility to curb Trump’s worst instincts. That designation belongs to the US Congress.

And I want to shift the locus of responsibility a bit: if Trump builds an autocracy, his congressional enablers will, if anything, be more responsible than him. After all, in amassing power and breaking troublesome norms, Trump will be doing what the Founders expected. But in letting any president do that, Congress will be violating the role they were built to play. We need to stop talking so much about what Trump will do and begin speaking in terms of what Congress lets him do.

It is, at this point, expected that they will confirm Trump’s unqualified nominees, ignore his obvious conflicts of interest, overlook his dangerous comments, and rationalize his worst behavior.

That expectation — and the cowardice it permits — is the real danger to American democracy.

These are not normal times. Congressional Republicans find themselves, or at least feel themselves, yoked to Donald Trump — an abnormal president who hijacked their primary system and mounted a hostile takeover of their party. Trump now holds them hostage: Their legislation requires his signature, their reelection requires his popularity, and he is willing to withhold both.

And so the institution meant to check the president now finds itself protecting him.

That Congress is not using its power is Congress’s fault, not Trump’s. Whatever danger Trump poses to the system is their fault as much or more than his — it is their job, after all, to check an out-of-control president.

There are obvious reasons for this. The danger for a House Republican in investigating Trump is that he’ll find something, and that something will be used by Democrats to win back Congress and, ultimately, the White House.  . . . It is Chaffetz’s job, more than it is anyone else’s, to hold Trump accountable, to demand that he govern in a transparent and ethical manner. And he has the power to do it. He can subpoena administration officials and Trump’s business associates. He can make sure the media and the public have much of the information Trump refuses to release, and he can make it costly for Trump to abandon longstanding norms around transparency, divestment, and governance. The American political system is prepared for the sort of challenge Trump represents, and there are corrective powers in place.

But the wielder of those corrective powers must want to use them. And Chaffetz doesn’t. His identity as a Republican supersedes his identity as chair of the House Oversight Committee, or even as congressman from Utah’s third district.

This, and not Trump, is what poses a threat to American democracy. Here, in miniature, you can see the problem we face: not a president who can’t be checked, but a president whose co-partisans don’t want to check him.

The problem America faces right now isn’t what Donald Trump will do, but what Republicans in Congress will let him do. That is an unintuitive way to think in a polity that obsesses over the president’s every tweet but barely shows up to vote in midterm elections. But it’s the reality.

[I]f Republicans in Congress abandon their constitutional role to protect their partisan interests, then they must be held no less accountable than Trump.

There is much talk of the resistance to the Trump administration, and many protests happening outside the White House. But it is in Congress members’ districts — at their town halls, in their offices, at their coffee shops — where this fight will be won or lost.

But for now, the crucial question — the question on which much of American democracy hinges — is not what Trump does. It is what Congress does. The danger posed by Trump is one that America’s political system is built to protect against. But the officials charged with its protection need to take their role seriously.

In the end, it is as simple as this: The way to stop an autocracy is to have Congress do its damn job.