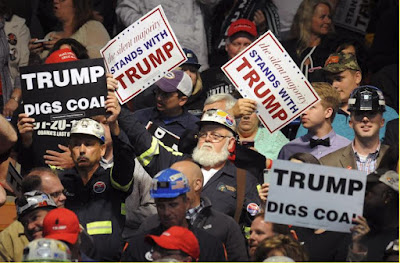 Coal producing areas of the country, including the increasing backward Southwest Virginia, embraced Der Trumpenführer and his lies about the "war on coal" for many reasons, not the least of which was the desire of voters to return to "the god old days" in the coal industry.  Never mind that (i) there was no "war on coal" and (ii) domestic and global demand for coal is headed in a downward spiral never to return to past levels.  Rather than admit economic reality and to face the task of accepting change - and modern thinking - it was far easier to embrace Trump/GOP lies.  Wanting something to be true, however, doesn't make it true as a piece in Think Progress underscores.  These fantasy embracing voters are going to be most disappointed and Democrats need to find a way to turn their disappointment against the Republicans who played them for fools.  Here are article highlights:

Bloomberg New Energy Finance (BNEF) has a message for the new president: You are not going to bring coal back.

Donald Trump won the presidency with claims that he is a brilliant businessman who will create jobs. He railed against a political “war on coal” supposedly waged by President Obama, one Trump claimed was “killing American jobs.” On his first day in office, Trump deleted all the climate change references on the White House website, replacing it with an “energy plan” that asserts he is “committed to… reviving America’s coal industry.”

In a new analysis, leading independent energy experts at BNEF dismantle these claims. “Whatever President Trump may say, U.S. coal’s main problem has been cheap natural gas and renewable power, not a politically driven war on coal,’” explain BNEF chair Michael Liebreich and chief editor Angus McCrone. Therefore “it will continue being pushed out of the generating mix.”

They note global electricity demand has grown much less than expected (thanks in part to energy efficiency).  . . . .  In a world of flat demand, the electricity market is a ruthless game of musical chairs — where the slowest and most unwieldy power sources keep losing their seat.

Coal power is just too costly and inflexible, explains BNEF: “Super-low-cost renewable power — what we are now calling ‘base-cost renewables’ — is going to force a revolution in the way power grids are designed, and the way they are regulated.”

When you add the revolution in cheap fracked gas — which Trump has pledged to double down on — it’s no surprise the country shut down over 40 gigawatts of coal-fired power stations since 2000. “These will not reopen whatever anything President Trump does,” explains BNEF, “nor do we see much appetite among investors for ploughing money into U.S. coal extraction — stranded asset risk will trump rhetoric.”

So Trump won’t be bringing back the domestic coal industry. And even if he could, he can’t bring back the jobs because it’s the coal industry itself that wiped out most of those jobs through productivity gains from “strip mines and machinery,” as Nobel Prize-winning economist Paul Krugman explained in 2014.

The fact is clean energy jobs are the only major new source of sustainable high-wage employment in the coming decades. Tragically, Trump’s misguided policies — his war on clean energy — mean the U.S. may not benefit from this exploding $50-trillion industry.