The Warlike Unity of Gay Americans Against Trump 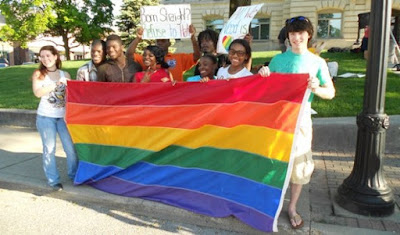 A piece in the New Yorker looks at a possible strength that the LGBT community my have in helping to lead the resistance to Der Trumpenführer's animus fueled regime: the fact that we cross all races and economic levels, come from many religious backgrounds,  and span literally all other minority groups.  Add in our allies and we have a network that can help galvanize opposition to Trump's illegitimate presidency.   Other than Muslims, LGBT Americans will likely be among the most targeted groups under the Trump/Pence nightmare, especially given the ascendancy of the Christofascists among the regime's inner circle.  We have an obligation to ourselves and to the future of the nation to make sure that Trump/Pence goes down to rejection and, with luck, impeachment.  The people need to take back their country from the billionaires and would be modern day fascists.  Here are article excerpts:

We have faced institutional oppression for as long as society has existed,” Corey Johnson, a young, gay New York City Council member, said on Saturday afternoon. “Progress is not guaranteed.” He was speaking to the several thousand demonstrators who had gathered outside Manhattan’s Stonewall Inn, the birthplace of the gay-rights movement. The last time such a large crowd converged on that spot, in June, it was to mourn: forty-nine men and women, many of them college-aged Latinos, had just been murdered at Pulse, a gay night club in downtown Orlando; the whole nation seemed to join in solidarity with its vulnerable citizens, even if Donald Trump, seizing on the shooter’s apparent allegiance to ISIS, tweeted that the murders proved him “right on radical Islamic terrorism.” Now, with Trump’s brand of hateful opportunism given the full force of law, the community came together again, to steel itself against threats to come and to protest the progress that has already been rolled back. As Johnson put it, referring to Trump’s anti-Muslim immigration ban, “We will treat injustices done against our neighbors as if they had been done against us.”

Trump’s ascension is driving the gay-rights movement to embrace its greatest natural strength: its extension across lines of race and class. Zeke Stokes, a vice-president at GLAAD, told me, “Our top priority is to make sure that we are locking arms with other parts of the progressive movement,” and Hari Nef, the trans actress and model, led her remarks at the rally with the legend of Marsha P. Johnson, a black trans woman who is said to have thrown the shot glass that started the Stonewall riots. . . . “They don’t know that we are Muslims, we are women, we are transgender, we are Mexican,” Carmelyn Malalis, the city’s commissioner on human rights, told the crowd. “They don’t know that we are united and never leave a brother or sister behind. Not ever.”

Such unity, loving and warlike, is the only defense against an Administration whose treatment of the vulnerable seems, like its whole agenda, to combine pernicious intentions with minimal planning.  . . . The left is sometimes ridiculed for its factionalism—its thicket of nonprofit support systems, its acronym for every gradation of identity. But when you shake one part of that structure, you learn how durably it is fastened to all the others.

The nationwide uprisings of the past weeks—from the Women’s March to the resistance to the immigration ban—have reminded us that, although the people’s power can be gathered by revanchist right-wingers and finance-friendly Democrats, it belongs ultimately to the people themselves.