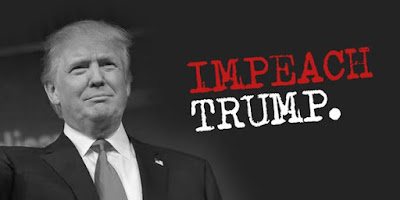 Conservative columnist - and at this point perhaps former Republican - Kathleen Parker is off the GOP reservation again and has a column in the Washington Post that I hope becomes predictive of what the Republican Party will face in two years if not sooner if it does not stop being a doormat for Der Trumpenführer.  It the Tea Party helped to give the GOP control of Congress in 2012, the growing resistance to the lies, conflicts of interest and attacks on civil rights of Der Trumpenführer could presage disaster for the GOP in 2018.  What I have found remarkable is the number of previously apolitical individuals belatedly waking to the reality that one must be politically involved to be a true patriot and to protect American democracy from those who would subvert it.   Here are column excerpts:

Good news: In two years, we’ll have a new president. Bad news: If we make it that long.

My “good” prediction is based on the Law of the Pendulum. Enough Americans, including most independent voters, will be so ready to shed Donald Trump and his little shop of horrors that the 2018 midterm elections are all but certain to be a landslide — no, make that a mudslide — sweep of the House and Senate. If Republicans took both houses in a groundswellof the people’s rejection of Obamacare, Democrats will take them back in a tsunami of protest.

Once ensconced, it would take a Democratic majority approximately 30 seconds to begin impeachment proceedings selecting from an accumulating pile of lies, overreach and just plain sloppiness. That is, assuming Trump hasn’t already been shown the exit.

With luck, and Cabinet-level courage that is not much in evidence, there’s a chance we won’t have to wait two long years, during which, let’s face it, anything could happen. In anticipation of circumstances warranting a speedier presidential replacement, wiser minds added Section 4 to the 25th Amendment, which removes the president if a majority of the Cabinet and the vice president think it necessary, i.e., if the president is injured or falls too ill to serve. Or, by extension, by being so incompetent — or not-quite-right — that he or she poses a threat to the nation and must be removed immediately and replaced by the vice president.

Thus far, Trump and his henchmen have conducted a full frontal assault on civil liberties, open government and religious freedom, as well as instigating or condoning a cascade of ethics violations ranging from the serious (business conflicts of interest) to the absurd (attacking a department store for dropping his daughter’s fashion line). And, no, it’s not just a father defending his daughter. It’s the president of the United States bullying a particular business and, more generally, making a public case against free enterprise.

To an objective observer, it would seem impossible to defend the perilous absurdities emanating from the White House . . .

In a hopeful note, a few Republicans are speaking out, but the list is short.

Rep. Jason Chaffetz recently got a taste of what’s ahead for Republican incumbents. Facing an unruly crowd at a town hallmeeting in Utah, the House Oversight Committee chairman was booed nearly every time he mentioned Trump. Even if many in the crowd were members of opposition groups, the evening provided a glimpse of the next two years. From 2010’s tea party to 2018’s resistance, the pendulum barely had time to pause before beginning its leftward trek.

While we wait for it to someday find the nation’s center, where so many wait impatiently, it seems clear that the president, who swore an oath to defend the U.S. Constitution, has never read it. Nor, apparently, has he ever even watched a Hollywood rendering of the presidency. A single episode of “The West Wing” would have taught Trump more about his new job than he seems to know — or care.

Trump’s childish and petulant manner, meanwhile, further reinforces long-held concerns that this man can’t be trusted to lead a dog-and-pony act, much less the nation. Most worrisome is how long Trump can tolerate the protests, criticisms, humiliations, rebuttals and defeats — and what price he’ll try to exact from those who refused to look away.