Quote of the Day: Is Trump Mentally Ill? 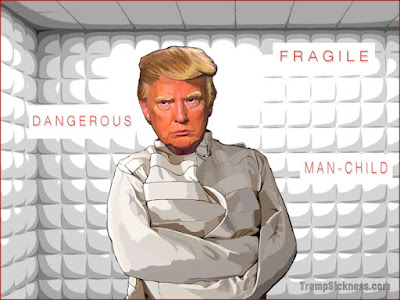 I have mixed feelings about conservative pundits and columnists who for years happily acted as apologists for some of the ugliest memes spread by the GOP and who in their own way assisted in allowing the alternate universe of Fox News and Breitbart to go largely unchallenged.  Now, some of them are belatedly issuing clarion calls about the dangers to America and the world by Der Trumpenführer and Republicans only too willing to go along with his insanity.  Jennifer Rublin is a case in point.  For far too long she closed her eyes to the embrace of ignorance and racism that increasing motivated much of the GOP base and found a leader in Trump and in many ways, the equally scary Mike Pence. In a column in the Washington Post Rubin calls it like it is - too bad she didn't start speaking out this forcefully eight or nine years ago.  Perhaps better late than never is the rule that applies, but what damage now being done to the nation could have been avoided if party had not been placed above country for so long.  Here are column highlights:

Trump’s unprecedented degree of out-and-out lying to the American people about things large (a conspiracy to cover up terrorist attacks) and small (crowd size) — especially stated in the presence of the intelligence community (as he did at CIA headquarters the day after his disappointing inauguration turnout) and the military — raises the legitimate concern that we cannot rely on the president’s words or assume his perceptions are accurate.  The military and intelligence officers listening to his rants know he babbles nonsense. They surely are entitled to doubt the mental stability and trustworthiness of the commander in chief.

Consider what else Trump might think is true: Our borders are open. Mexico will pay us back for the wall. Tariffs will hurt China, not the American consumer. The Russian government is no worse than the United States when it comes to human rights and international conduct. In other words, much of Trump’s world view — we’re losing, our allies are stealing us blind — and the policies he pursues are based on nothing but his imagination and urban myths fanned by right-wing talk radio. Far too many Republicans have played along, reticent to call out his reverence for Russian President Vladimir Putin, silent when his plan for a wall on our Southern border started a war of words with Mexico and utterly unwilling to confront him on the noxious travel ban.

More is needed however from Republicans, Cabinet officials, Democrats, conservatives outside government and the public. Trump’s dangerous delusions need to be addressed head on — in part to determine if he is intentionally stoking fear or if he is intellectually and emotionally unfit.

I would argue that Trump has more than demonstrated that he is mentally unfit.  He needs to be removed from office NOW.