Trump Claims That the Media Covers Up Terror Attacks 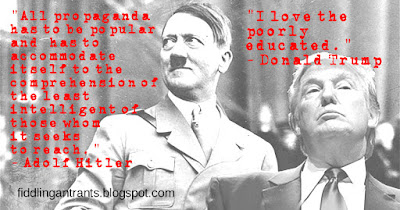 Each new day one sees another - or, in some cases, a half dozen or more - new lies emanating  from the White House and its sociopath occupant.  Worse yet, the scale and dangers posed by the lies continues to escalate.  Seemingly, there is no limit to what lies Der Fuhrer, his Minister of Propaganda, Kellyanne Conway, and others like the White House Press Secretary will spew either to confuse or confound average Americans not to mention citizens of other nations. Perhaps most chilling are the lies told about the media where anything displeasing to Der Fuhrer becomes "fake news" and the media is accused of covering up news stories - that actually do not exist - that play to support Trump's paranoia and narcissism.  A piece in The Atlantic looks at this very scary trend. Here are excerpts:

The Donald Trump who arrived at MacDill Air Force Base near Tampa on Monday was subdued and dark, promising to keep the United States against “radical Islamic terror” through a strong defense, and accusing the press of willfully refusing to report on terrorist attacks.

But first, as he is wont to do, Trump let his mind drift back to a happier time, . . . . “We had a wonderful election, didn’t we?” the president said as he began his remarks. “And I saw those numbers, and you liked me, and I like you. That’s the way it worked.”

That was about as sunny as things got, although Trump has great praise for U.S. Central Command and U.S. Special Operations Command, both of which are housed at MacDill. Trump did boast about pressuring Lockheed Martin to knock nine figures off the cost of the F-35, and he took a moment to boost his nominee for a vacancy on the Supreme Court, Judge Neil Gorsuch—though, weirdly, he did not mention Gorsuch’s name.

The threat to the U.S. is great, in Trump’s telling.

“The challenges facing our nation nevertheless are very large. Very, very large,” Trump said. “We’re up against an enemy that celebrates death and totally worships destruction. You’ve seen that. ISIS is on a campaign of genocide, committing atrocities across the word. Radical Islamic terrorists are determined to strike our nation as they did on 9/11, as they did from Boston to Orlando to San Bernardino and all across Europe.”

He continued: “You’ve seen what happened in Paris and Nice. All over Europe, it’s happening. It’s gotten to a point where it’s not even being reported. And in may cases, the very, very dishonest press doesn’t want to report it. They have their reasons, and you understand that.”

The last few sentences there are staggering: Trump’s assertion that there are attacks that the press is not reporting, and furthermore is not reporting for political reasons. In fact, the media love reporting on terrorism stories, following the old news adage that “if it bleeds, it leads.”

But never mind that: Just what attacks is Trump claiming have not been covered? He did not name any, and a request to the White House for a list was not returned. It’s a safe bet there are not any. Trump might prefer more frequent, or more salacious, coverage of European attacks, but that’s a different complaint.

Then there is the accusation that the press is intentionally covering up, for some nefarious reason that his audience will understand but need not go stated, a classic example of dogwhistle politics. That’s in keeping with his longstanding assault on the press, though when combined with the implication that they are doing so to undermine the nation’s security, it takes on an even darker shade.

Once again, the nation is left to ask whether Trump’s wild deviation from reality is intentionally misleading or simply sloppy and careless. The natural comparison is to comments last week by senior Trump aide Kellyanne Conway, who claimed that Trump’s immigration executive order would have prevented the “Bowling Green massacre” that was not covered. There was, of course, no such massacre, . . .