The War Against Same-Sex Marriage is Just Getting Started 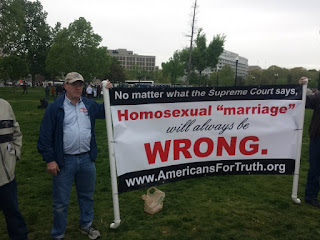 For obvious reasons, the husband and I are concerned about the growing efforts of Christofascists to push through so-called "religious freedom" laws which would grant homophobes and gay haters carte blanche to discriminate against same sex couples - and many others who fail to subscribe to their fear and hate based beliefs.  Under such laws, all that one would need do is claim that one's religious beliefs were in essence offended by same sex couples, cohabitation heterosexual couples and even women on contraception.  Here in Virginia, the Republican controlled Virginia General Assembly has passed a license to discriminate bill that fortunately will be vetoed by Democrat Gov. Terry McAuliffe.  Should Republicans win the governorship in November, such a law could be passed a year from now. But the effort to destroy the rights of same sex married couples isn't confined to Virginia.  At the federal level a pernicious anti-LGBT GOP sponsored bill is pending in Congress.  Hundreds of bills will likely be introduced in state legislatures this year.   I am worried about my own rights, but I am just as concerned about the poisonous impact these special rights for Christofascists would work on younger LGBT Americans who deserve full equality under the law.  A column in the Los Angeles Times looks at the coming war on gays.  Here are excerpts:

An executive order leaked to the media last week revealed plans to use the Oval Office to legalize broad discrimination against the LGBT community in the name of religion. A draft of the order, first published in The Nation, would allow﻿ “any organization, including closely held for-profit corporations” to refuse services to LGBT people, whether in housing, employment, education or healthcare. In the media uproar that followed, Donald Trump said that he would not sign the order at this time.

But the president did not rule out doing so in the future.

The document is a reminder that while Trump has claimed he won’t overturn marriage equality in the White House, he doesn’t have to repeal Obergefell v. Hodges — the Supreme Court decision that legalized same-sex marriage — to strip the rights of gay and lesbian couples. The order is specifically designed to allow anyone who has a religious objection to same-sex marriage to discriminate in the name of faith — and would prevent the government from taking action against any individual who acts on those views.

Trump, who said his personal view on same-sex marriage is “irrelevant,” claimed the case “was already settled.” . . . What makes this claim rather disingenuous is that Trump doesn’t need the court system to neuter the protections allowed by Obergefell v. Hodges, which offer the full legal rights of marriage to all couples.

Same-sex partners may get to keep their marriages under the Trump administration, but those unions will mean little if the federal government erodes the rights and benefits afforded to that status.

In essence, the leaked document is an executive version of the First Amendment Defense Act — or HR 2802 — a national version of the Religious Freedom Restoration Act laws introduced in states like Indiana and Louisiana.


The bill — which also could be used to fire a gay employee for having a picture of his legally wedded partner on his desk, or to deny housing to a lesbian couple — will be debated by Congress later this year. On his campaign website, Trump vowed to sign it.

Trump’s Supreme Court pick, Neil Gorsuch, would appear to confirm the administration’s commitment to so-called religious liberty over the rights of same-sex couples.

It remains to be seen how a SCOTUS with Gorsuch on the bench would rule if many of the central tenets of marriage equality — the equal protection of same-sex couples under the law — are disputed by religious liberty advocates.

The impending challenges to same-sex marriage, though, may take place sooner rather than later. The Texas Supreme Court will hear oral arguments this year on a case out of Houston, a trial that will decide whether same-sex couples in the Lone Star State are entitled to the same marriage benefits as heterosexual couples.  Although the court passed on it in September, the case has been a favorite of Lt. Gov. Dan Patrick, who repeatedly lobbied for the judges to reconsider hearing it. Patrick, who famously suggested that the LGBT victims of the Pulse massacre deserved to be murdered, served as Trump’s campaign chairman in Texas.

Justice John Devine, the most far-right member of the Texas Supreme Court, already has stated his opposition to providing spousal benefits to same-sex couples, which he believes are not guaranteed under existing law.

Over 200 bills targeting the rights of the community were heard by state legislatures last year, a figure that more than doubled over the prior year. A majority of these cases were over the very religious objections that will take center stage this year.

The LGBT community would appear to have won an important victory with Trump’s momentary decision to put his executive order on hold — after many claimed it was already a done deal. But be warned: The war against same-sex marriage is just getting started.

Will "friends" who voted for Trump raise their voices and condemn such efforts to harm LGBT Americans?  I am not holding my breath.  Like Germans during the early 1930's, since they are not directly impacted, I expect most will do nothing. Be afraid.
Posted by Michael-in-Norfolk at Saturday, February 11, 2017