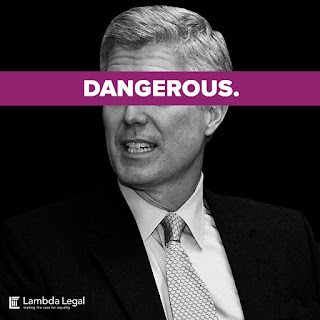 The title of this post asks a question that has already been answered if one follows the past decisions of Judge Neil Gorsuch.  In his mind, religious beliefs - of right wing Christians only, of course - override everything else, including the civil rights of gays, Muslims, non-Christians and everyone in between.  His opinion in the Court of Appeals ruling in the infamous Hobby Lobby case made this disturbing world view all too clear.  Add to that his founding and leadership of a club "Fascism Forever" at his elite private high school and one gets an image of a very disturbing individual.  An individual who seemingly totally buys into the Christofascist myth that restriction on their ability to abuse and discriminate against others equates to the "persecution of Christians."  A piece in Religion Dispatches looks at the danger Gorsuch poses to the civil rights of a majority of Americans, especially those most hated by evangelical Christians.  Here are highlights:

Amid the onslaught of alarming news streaming (and in some cases, leaking) out of the White House, it’s hard to keep track of each new threat to democracy. But with President Trump’s Muslim ban followed closely by his pledge to “destroy” the Johnson Amendment, a clear theme has emerged in the Trump-Pence administration: “religious freedom” (for conservative Christians, at least) is top of the agenda.

Trump’s nomination on Wednesday of Judge Neil Gorsuch to the Supreme Court may seem like a reliably conservative choice—or even a relatively moderate selection, given the far-right bent of the rest of his picks. But despite some speculation that, if confirmed, a Justice Gorsuch would oppose some of Trump’s more extreme policies, attorneys working to defend the separation of church and state are worried.

To better understand the impact Gorsuch might have on the nation’s high court, RD spoke with Alex Luchenitser, associate legal director of Americans United for Separation of Church and State (AU). According to Luchenitser, AU is primarily concerned about Judge Gorsuch’s history of privileging “religious freedom” over civil rights.

Luchenitser pointed to two cases on which Gorsuch ruled in the 10th Circuit regarding the so-called contraceptive mandate under the Affordable Care Act (ACA). Before each case arrived at the Supreme Court, Gorsuch ruled in favor of Hobby Lobby Stores and Little Sisters of the Poor, arriving at a disconcerting conclusion that a “substantial burden on religious exercise” is whatever the petitioner says it is.

In Hobby Lobby Stores v. Sebelius, Gorsuch “voted that the religious objections of for-profit businesses should override the rights of women to receive contraceptive coverage,” Luchenitser explains. . . . .  “any connection between the action of the owners and the prevention of development of a fetus” would constitute an impermissible infringement on the owners’ free religious exercise.

Similarly, Judge Gorsuch heard Little Sisters of the Poor v. Burwell before it reached the Supreme Court, and determined that the ACA regulation that required religious nonprofits to provide contraceptive coverage to employees through a third party was also an unacceptable burden on the nonprofit’s freedom of religion.

“What judge Gorsuch’s opinions in these contraceptive coverage cases signal is that he is likely to elevate the concerns or objections of religious objectors over civil rights in a wide variety of areas — not only [in] women’s healthcare, but also discrimination against customers or employees,” says Luchenitser. “For example, businesses who want to discriminate against LGBTQ people either in employment or deciding who they want to serve, based on religious reasons, would probably do fairly well before Judge Gorsuch.

Luchenitser says there isn’t enough evidence in Gorsuch’s judicial record to assess whether he would privilege religious freedom complaints from Judeo-Christian plaintiffs over those brought by adherents of other faiths, but there is reason for concern about what Gorsuch considers state endorsement of a particular faith. In two separate cases, Judge Gorsuch has ruled that public displays of Christian iconography on public grounds do not constitute a formal endorsement of that faith.

Overall, Trump’s nomination of Neil Gorsuch fits neatly into the fast-emerging theme of this administration, which prioritizes religious freedom over other foundational pillars laid out in the First Amendment. Regardless of whether Senate Democrats make good on their vague threat to filibuster Gorsuch’s confirmation, it’s clear that the Trump-Pence administration is hell-bent on dismantling the separation of church and state.