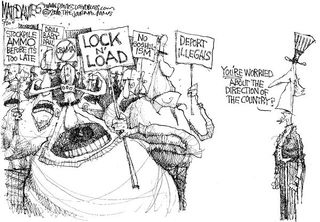 But for the threat it poses to the country as a whole, it would almost be entertaining to watch the civil war that is consuming the Republican Party.   Moreover, some of us would  - and do - tell the GOP leadership that all of the woe they perceive themselves to be facing in the form of Donald Trump's candidacy is a self-created problem.  For years the GOP leadership cynically pander to and inflamed the hate and misogyny of elements of the party base.  Worse yet, they welcomed the Christofascists, white supremacists and those who embraced ignorance into the party ranks and, in far too many instances, voted them onto city and county committees (I recall a local Christian Coalition leader being voted onto the Virginia Beach city committee).  Now, this rabble, if you will, is out of control  and the GOP elites are horrified at what they have wrought, although they seek to place blame on anyone but themselves.  More interestingly, they are now turning on and attacking those who they previously sought to recruit and coddle through efforts to encourage a feeling of victim hood.  A column in the New York Times looks at the phenomenon.  Here are highlights:

Conservatives who once derided upscale liberals as latte-sipping losers now burst with contempt for the lower-income followers of Donald J. Trump.

These blue-collar white Republicans, a mainstay of the conservative coalition for decades, are now vilified by their former right-wing allies as a “non-Christian” force “in thrall to a vicious, selfish culture,” corrupted by the same “sense of entitlement” that Democratic minorities were formerly accused of.

Kevin Williamson, a columnist for National Review, initiated the most recent escalation of this particular Republican-against-Republican power struggle. In a March 13 essay, “The Father-Führer,” Williamson portrays Trump’s struggling white supporters as relying on their imaginary victimhood when, in fact, he contends:

They failed themselves. If you spend time in hardscrabble, white upstate New York, or eastern Kentucky, or my own native West Texas, and you take an honest look at the welfare dependency, the drug and alcohol addiction, the family anarchy — which is to say, the whelping of human children with all the respect and wisdom of a stray dog— you will come to an awful realization. It wasn’t Beijing. It wasn’t even Washington, as bad as Washington can be.

Less well-off white voters have only themselves to blame, Williamson continues:

It wasn’t immigrants from Mexico, excessive and problematic as our current immigration levels are. It wasn’t any of that. Nothing happened to them. There wasn’t some awful disaster. There wasn’t a war or a famine or a plague or a foreign occupation. Even the economic changes of the past few decades do very little to explain the dysfunction and negligence — and the incomprehensible malice — of poor white America.

Not satisfied to stop there, Williamson adds:

The truth about these dysfunctional, downscale communities is that they deserve to die. Economically, they are negative assets. Morally, they are indefensible. Forget all your cheap theatrical Bruce Springsteen crap. Forget your sanctimony about struggling Rust Belt factory towns and your conspiracy theories about the wily Orientals stealing our jobs.

Finally, determined to blow a hole in the Trump hot air balloon, the columnist hits hard:

Williamson’s bitterness over the refusal of Trump’s supporters to get in line behind a more acceptable candidate is echoed across the right.

In a prescient Jan. 14 essay, “To Attract Disillusioned Voters, the GOP Must Understand Their Concerns,” Henry Olsen, a senior fellow at the Ethics and Public Policy Center, a conservative think tank, wrote:

America’s self-appointed best and brightest uniformly view the passions unleashed by Trump as the modern-day equivalent of a medieval peasants’ revolt. And, like their medieval forebears, they mean to crush it. That effort is both a fool’s errand for the country and a poisoned chalice for conservatives and Republicans.

In Olsen’s view, disparaging Trump’s lower-income white supporters “will simply intensify the masses’ rage and ensure that their political spokesmen become more intransigent and radical.” Even worse, keeping blue-collar white Americans out of political power will result in exactly what Washington elites have wanted for years: a series of grand bargains that keep the status quo largely intact and the Democratic party in power.

Only now are major party leaders and contributors beginning to recognize the full depth of this intraparty conflict.

On March 28, my colleague Nick Confessore documented in crushing detail how Republican leaders, donors and strategists disregarded the mounting discontent of white working class Republicans, thus setting the stage for the Trump campaign.

The history, Confessore wrote, is one of a party elite that abandoned its most faithful voters, blue-collar white Americans, who faced economic pain and uncertainty over the past decade as the party’s donors, lawmakers and lobbyists prospered. From mobile home parks in Florida and factory towns in Michigan, to Virginia’s coal country, where as many as one in five adults live on Social Security disability payments, disenchanted Republican voters lost faith in the agenda of their party’s leaders.

The virulent attacks on less affluent Republican voters by Williamson et al raise the question: As a matter of practical politics, how can a party that is losing ground in virtually every growing constituency — Hispanics, Asians, single women and the young — even consider jettisoning a single voter, much less the struggling white working class?The Republican Party has seen its core — married white Christians — decline from 62 percent of the population of the United States to 28 percent in 2015, according to the Public Religion Research Institute.

The comparatively low levels of support for Trump among college-educated Republicans, women, young voters and those with incomes above $100,000 suggest that these voters are most likely to sit out the election or to vote Democratic if Trump is the nominee. Conversely, groups that gave him higher than average support in the primaries — the less well educated, those with incomes below the median, men and rural voters — are likely to deliver his best margins in the general election.

If there are two key themes in the election so far, one is Trump’s ability to enrage; the other is his ability to exceed expectations. The disregard of liberal and conservative elites for working and middle class voters has manifested itself in a consistent underestimation of the anger, resentment and pessimism of these voters — and hence of their electoral power.

It is an irony of history, then, that [Martin Luther] King’s language [about the two Americas]  perfectly describes the conflict today between the privileged establishment and the hard pressed rank and file of the overwhelmingly white Republican Party — a conflict between haves and have-nots that is taking the Republican Party to a place it has never been.