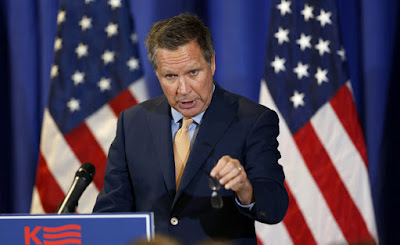 Given the insanity and freak show nature of the Republican presidential nomination contest, it is easy to be lulled into believing that Ohio Governor John Kasich might be somewhat acceptable as the GOP nominee or as president.  Unfortunately, that view overlooks the reality of Kasich's record and that, among other things, he is anti-gay and anti-woman when not engaging in union busting and diverting funding from public education.  Only  the extremism of Donald Trump and Ted Cruz make Kasich seem sane and moderate in comparison.  Gawker has a timely piece that reminds us that Kasich is just as scary  as his opponents, just in a less flamboyant way.  Here are article highlights:

With Jeb Bush and Marco Rubio out of the running, Ohio Governor John Kasich is the establishment candidate no one saw coming. And sure, compared to the rest of the GOP’s increasingly terrifying sideshows in suits, Kasich comes across as sane. But don’t be fooled: John Kasich is just as much of a monster as the rest—he just hides it better.

In March of 2009, Kasich infamously (at least in Ohio) noted that the state needed to “break the back of organized labor in schools.” Which is to say, John Kasich would like to break the back of the teachers unions. The same teachers unions that have, according to him, “smeared my record and distorted it.” It’s not just teachers Kasich wants to bust; it’s organized labor in general. From The Columbus Dispatch:

Kasich, who is backed by business groups, also opposes paying prevailing wages on state-funded construction projects. And as part of a sweeping review of state laws and regulations, he wants to reexamine the 1983 law that gave public employees in Ohio the right to collective bargaining, arbitration and strike (except for safety forces).

John Kasich loves to talk about how he brought jobs back to Ohio after the recession. The problem with that line of thinking, though, is that every state regained jobs after the recession. In fact, most states even managed return to pre-recession employment rates. Ohio was not one of those states.

According to Cleveland.com, by May of 2014, Ohio actually had 119,900 fewer jobs than when the recession began. As for the jobs Kasich did create, the majority were low-wage. According to a 2014 report by a progressive Cleveland think tank, Ohio’s median wage was nearly a dollar below the national average at $15.81 per hour.

Kasich is big on charter schools, which in his case meant spending over $1 billion on a program that exists to divert public funding to private pockets. According to progressive advocacy group Innovation Ohio:

What’s more, The Akron Beacon Journal reported that “state auditors have uncovered $27.3 million improperly spent by charter schools, many run by for-profit companies, enrolling thousands of children and producing academic results that rival the worst in the nation.”

It’s incredibly fortunate for John Kasich that Ted Cruz is Ted Cruz. Because if he weren’t standing next to an opponent so phenomenally, nauseatingly unlikeable, we all might realize that Kasich himself is also a dick.

Back in 2014, John Kasich was asked about his decision to sign into law a provision prohibiting rape crisis counselors from referring rape victims to abortion services. In other words, John Kasich imposed a rape crisis counselor gag rule. Instead of answering a perfectly reasonable question about an incredibly pernicious law, Kasich just... ignored it. . . . . Dangerously backwards women’s health laws aren’t just for the South anymore. In fact, Ohio has some of the most restrictive abortion laws in the country, mostly thanks to John Kasich.

In just five years, Kasich manged to pass 11 different laws restricting abortion rights for women. Mother Jones points out that “since 2011, half of Ohio’s 16 clinics have closed, and according to The Columbus Dispatch three of the remaining eight are in risk of closing if they cannot find a hospital within 30 miles willing to enter a transfer agreement.”

As Kellie Copeland, executive director of NARAL Pro-Choice Ohio, told Mother Jones, “He is, if not the worst, among the worst of anti-choice governors in this country’s history.” There’s your reasonable, moderate Republican, everyone!

Compared to Saddam Hussein or the Assads, father and son, Moamar Ghaddafi was a moderate.

Not mentioned in the Gawker extract is that John Kasich, like many other Republiscum, is also a fan of voter suppression and has been for years.