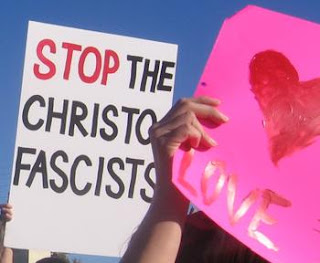 As a former Republican, in my view it is far past time when the business community base of the Republican Party needed to stand up to the knuckle dragging elements of the party base best embodied by Christofascists - many of whom are also white supremacists - who want to drag the nation back to the worse aspects of the 1950's and in the process make right wing Christianity the de facto national religion.  With the ongoing fights over deceptively named "religious liberty" bills at the state level, the business faction of the GOP has finally realized that pandering to the prejudices of the Christofascists is bad for business - just ask the High Point Furniture Market which is seeing massive cancellations thanks to the North Carolina GOP.  A piece in the Washington Post looks at the growing civil war between the business wing of the GOP and the religious extremists of the Christofascist elements of the party base.  Here are excerpts:

The ideological rifts breaking apart the Republican Party have moved into the states, where business leaders and evangelicals who have long coexisted in the GOP are suddenly at war over social issues such as gay rights and religious freedom.

The escalating feud has been evident in recent days in Georgia and North Carolina, where Republican governors have taken opposite approaches to dealing with these two vocal constituencies.

Georgia Gov. Nathan Deal, facing pressure from corporate heavyweights such as Delta Air Lines and Disney, vetoed a bill that would have allowed pastors and faith-based groups to deny services to same-sex couples. The decision by Deal, who is not running for reelection, has drawn fire from leading evangelical activists, who have accused him of being a traitor to their cause.

The legislative battles, which have played out in state capitals across the country, underscore the unusual level of disarray in a party that traditionally strives for order. Rather than unifying around a message and strategy to win back the White House and retain congressional majorities, the GOP is largely collapsing amid factional warfare. There is seemingly no issue where Republicans agree — with bitter disputes raging over trade, foreign policy, entitlements and social issues.

Trump’s rise has muddied the ideological waters for the camps that have long made up the bulk of the GOP coalition — the three-legged stool built by Ronald Reagan in the 1980s consisting of fiscal conservatives, national security hawks and social conservatives. He has railed against free-trade deals backed by big business and blasted an interventionist foreign policy embraced by GOP hawks.

But the state-level battles between businesses and evangelicals demonstrate that the Republican Party’s troubles go beyond the concerns over Trump — pointing to a potentially irreconcilable divide between core elements of the GOP base.

Each side remains influential. Evangelical leaders can mobilize large numbers of activists and voters in key states and congressional districts. Corporations, meanwhile, operating in a post-Citizens United world of unlimited political spending, have the ability to put enormous pressure on policymakers.

“You are talking about two portions of the Republican Party who don’t fundamentally understand one another. . . . . The anger among evangelicals was especially raw this week after Deal’s veto.  “The devil has gone down to Georgia again, but this time it was in the form of big business and cowardly politicians,” said Tony Perkins, president of the evangelical Family Research Council.

Evangelical activists began pushing measures they describe as promoting “religious liberty” — aimed at protecting people such as wedding cake bakers or photographers who object to same-sex marriage from being legally compelled to participate in ceremonies. But these protections are often written broadly, with critics arguing they allow discrimination against the LGBT community in other ways, such as in employment and providing charitable services.

The focus on gay marriage ran counter to recommendations in a post-2012 election autopsy report published by the Republican National Committee. The report urged the party to move away from social issues as a way to expand the GOP’s reach beyond core conservatives.

Many Republican elites, including executives at big companies, feel like gay marriage is settled law and do not think special measures are needed to protect religious conservatives.

“Generally, in the past, big business wanted to keep out of social issues,” said David Boaz, a longtime leader at the libertarian Cato Institute. “The corporate world has moved more to the cultural left. The religious right is feeling more and more embattled, isolated, and that makes them even angrier about things like this veto in Georgia.”

The [2016 gubernatorial] campaign in North Carolina could hinge on how evangelicals and business leaders respond.  The state’s attorney general, Roy Cooper, a Democrat vying to unseat McCrory, on Tuesday called the law a “national embarrassment” and said he would not defend it in court.

The feuding will likely unfold in additional states over the coming weeks and months. . . . Gregg Keller, the Missouri-based GOP operative who was tasked with outreach to conservative activists on Wisconsin Gov. Scott Walker’s presidential campaign last year, said the business wing should recognize that religious conservatives will not go away.

“One of the largest cultural imperatives that helped lead to the rise of Christianity was the view of the sexually licentious nature of the Roman Empire,” he said. “This is not a bug of evangelical Christianity; this is a feature. This is a hill on which evangelical Christians are going to be willing to die.”  He added: “The business community has caught the bull by the horns on this one.”