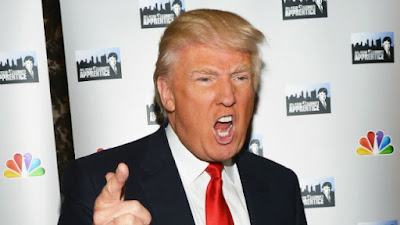 Donald Trump set off his latest firestorm by saying that women who have abortions need to be punished.  He quickly tried to walk back the comment with little success, and deservedly so.  Since the beginning of his campaign, Trump has demonstrated that he speaks and thinks later.  The question is, whether he does so deliberately to merely excite his low education, low knowledge base of support or whether his rash behavior is a symptom of something else.  Something call delusional senile dementia.  If it is the later, as a piece in Daily Kos argues, the specter of a Trump presidency is truly frightening.  Here are column excerpts (read it and share your thoughts):

Watching the very public meltdown of Donald Trump over the past few months could serve as a useful tool for academic research into dementia and brain disease. When looking objectively at the symptoms commonly associated with dementia it is hard not to consider Trump a likely candidate for such a diagnosis. What follows is an exploration of the three most prominent symptoms of dementia and their relationship to Trump's behavior.

Impaired judgment
From the very beginning of his of campaign for the Republican nomination for president, Trump engaged in outbursts that were hostile and irrational. His assertion that the immigrant population in the U.S. was the result of Mexico sending over rapists and murderers was untethered to reality. And that was just the first day. Trump went on to disparage Sen. John McCain, saying that he was not a war hero; he charged that Megyn Kelly's questions during a Fox News debate were unfair because she was menstruating; he proposed a ban on all Muslims from entering the country; he had a prominent Latino journalist ejected from his rally; he told a reporter that he isn't bothered by comparisons to Hitler . . .

Trump's birtherism with regard to President Obama is another illustration of a severe mental failing. There has never been a single bit of information that showed anything other than that Obama was born in the U.S. to a U.S. citizen. Nevertheless, Trump continues to doubt the truth of this.

These are all examples of behavior that is inconsistent with rational judgment. They have no basis in fact and cannot be portrayed as constructive methods of expressing oneself. Those who would argue that Trump's showing in the polls validates his conduct are missing the point. Regardless of the result, these actions are not indicative of a rational mind.

Loss of Memory
Trump has frequently bragged that he has"one of the best memories of all time." However, that boast has been utterly demolished by his own words and actions. One notable example was his insistence that he had seen television reporting of "thousands and thousands" of Muslims celebrating the collapse of the World Trade Center towers on 9/11. That was an invented memory because there is no evidence that it occurred, despite the fact that television footage of such an event would be easily retrievable.

Trump's memory was also noticeably deficient when he recently began hammering Ted Cruz as a "nasty guy" and "the single biggest liar" he ever met. Just three months ago he was lauding Cruz and floating him as a possible VP pick. Similarly he once praised Hillary Clinton as a “terrific” woman and a great Secretary of State. Now he is saying that she was the “worst Secretary of State in history.” . . .

Childish Behavior
This is perhaps the symptom least in need of elaboration, but here goes anyway. Trump is the most juvenile presidential candidate in this nation's history. He lashes out with infantile insults about people's looks and character. If he is criticized he will punch back with baseless, often unrelated, rebuttals. And that's when he isn't throwing tantrums like when he ditched the Fox News debate. Everyone who doesn't exhibit unrestrained adoration is an enemy who is out to destroy him.

Trump has the ego of four year old who believes the world revolves around him. The parts of his campaign stump speeches that aren't attacks on his rivals are comprised primarily of bragging about how great he is at everything and how high his poll numbers are. The rest of his rhetoric, when put through the Flesch-Kincaid readability test, scored at the third grade level. Of course, that’s probably still somewhat higher than most of his Tea-vangelical supporters.

His immature outbursts, his brazen narcissism, and his faulty cognition, are all indications of senility.