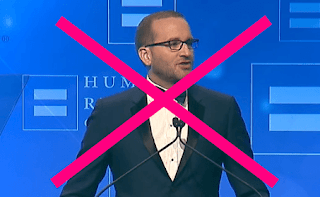 In response to my last post about the Human Rights Campaign's insane endorsement of Republican Mark Kirk over Democrat Tammy Duckworth, a reader did some digging and found that the top officers of HRC were paid over $2,000,000 in 2014.  How much did HRC give to state level groups fighting against anti-gay extremists? Here are two examples: Equal Rights Houston got the whopping amount of $10,000. Equality North Carolina got $25,000. Equality Foundation of Georgia $25,000.  Michelangelo Signorile hit the nail on the head when he suggested that top HRC officials are far more concerned about keeping the money coming in from gay Republicans (who in my view are akin to Jews who would have supported the Nazi Party in the 1930's) than they are about the rights and lives of those of us out in the hinterland.  Here's what my reader sent to me - it speaks volumes:

To put this into further context, Schedule I, beginning on page 103, shows the cash support provided to the 30 organizations that received cash support. I point out that Equal Rights Houston got the whopping amount of $10,000. Equality North Carolina got $25K as did the Equality Foundation of Georgia. We know what the status of equality in Houston and North Carolina is now and what the status of equality in Georgia is likely to be should the sociopaths and psychopaths get their way. I venture to suggest that had the half-million dollars or so wasted on a couple of vice-presidents been used instead for productive advocacy, our brothers and sisters might not now be third-class citizens.

Your comment about gay Republicans and hypothetical self-destructive Jews in 1930's Germany struck a reminder.

I wonder what Out NYC Hotel owners Ian Reisner and Mati Weiderpass now think of their investment in Ted Cruz, whose presidential campaign knowingly and repeatedly features religious psychopaths who want to see them, and about 13 million other LGBT Americans, dead. (One of these nutcases also seeks the death of Girl Scout leaders.)

Incidentally a quick Google search indicates that Reisner and Weiderpass are also being sued for wage theft and discrimination on the basis of sex.