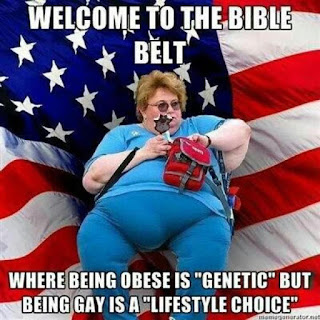 By almost every standard, Mississippi routinely ends up ranked last in the nation and, in many respects is Exhibit A of what Republican rule brings to a state.  Now, while already lagging behind every other state economically, the Mississippi Senate has passed an animus motivated bill that some say is the most sweeping in its mistreatment of LGBT citizens and grants the most special rights to knuckle dragging Christofascists.  One can only assume the state Senate wanted to the state to be known for something other the highest poverty rates and highest teen pregnancy rates in America.  (When I lived in Alabama years ago, we always said "Thank God for Mississippi" since it ALWAYS ranked worse than Alabama).  BuzzFeed looks at this legislative travesty that seeks to make far right Christianity a de facto state religion while trampling on the religious liberty of all others.  Here are highlights:

The Republican-dominated Mississippi Senate voted 31-17 on Wednesday night for a religious freedom bill that critics believe is the the most sweeping anti-LGBT legislation in the United States, allowing denial of products and services in a wide range of venues.

Immediately after the vote, a Democrat proposed a motion to reconsider — thereby requiring another vote later this week, which many consider a procedural formality, but could buy critics time to build opposition.

The bill already passed the House 80-39 in February. However, the Senate’s version was amended slightly, and the House must concur before the legislation can go to the governor.

Republicans, who hold a majority in both chambers, have argued the bill fixes problems created for people of faith by the Supreme Court’s 2015 marriage equality ruling.

“It gives protection to those in the state who cannot in a good conscience provide services for a same-sex marriage,” Sen. Jennifer Branning said in an address to her colleagues.

“This is probably the worst religious freedom bill to date,” Ben Needham, director of Project One America, an LGBT advocacy group in the Deep South, told BuzzFeed News.

Specifically, House Bill 1523 would protect individuals, religious organizations, and certain businesses who take actions due to their religious objections to same-sex marriage. It would also protect those who object to transgender people. The bill says they could not face government retribution if they were acting based on “sincerely held” religious beliefs.

Further, it covers those who decline for reasons of faith to provide counseling services, foster care, and adoption services — even, apparently, those receiving government funding. Clerks who issue marriage licenses could also recuse themselves.

Gov. Phil Bryant did not immediately respond to BuzzFeed News’ a request to comment on whether he would veto the measure or allow it become law if it reaches his desk.  However, Bryant told WLOX last week he doesn’t think the bill is discriminatory.

“I think it gives some people as I appreciate it, the right to be able to say, ‘That’s against my religious beliefs and I don’t need to carry out that particular task,’” he said.

The 13-page measure prohibits the government from “discriminating” against a person and certain organizations for acting on their religious convictions.


“It is reminiscent of what happened 50 or 60 years ago in this same state,” Fleming told BuzzFeed News. “People say that it is just religious, but there were people who had a religious belief that black and white people should be segregated, and you’re opening that Pandora’s box again.”

Call me perverse, but I long for the day when conservative Christians are a small enough minority that the rest of us can push for passage of legislation that strips these foul individuals of non-discrimination protections and allows them to be treated in the manner that they have treated others for decades if not centuries.
Posted by Michael-in-Norfolk at Wednesday, March 30, 2016