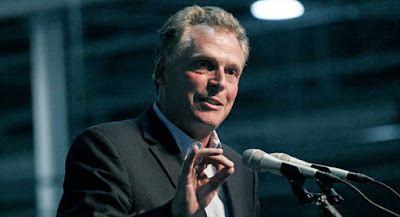 Proving yet again that elections matter, Virginia Governor Terry McAuliffe kept his word and vetoed an anti-gay bill passed by the Republican controlled Virginia General Assembly that would have granted special rights to Christofascists who sought to exempt themselves from non-discrimination laws on the basis of claimed religious belief.  The bill was one of the priority pieces of legislation of The Family Foundation, a viciously anti-gay, anti-modernity "family values" organization.  In vetoing the animus motivated bill, McAuliffe noted that such license to discriminate laws are bad for business - not to mention, unconstitutional - as North Carolina is finding out with a vengeance.  The Virginian Pilot has details on McAuliffe's veto.  Here are highlights:

As promised, Gov. Terry McAuliffe on Wednesday vetoed a bill that said no minister or religious organization could be penalized for acting on a belief that marriage should be only between a man and a woman.

The Republican-controlled General Assembly passed the legislation, SB41, this year as a religious freedom bill.

McAuliffe, however, said that religious freedoms already are protected, and that state Sen. Bill Carrico’s bill was unconstitutional and discriminatory. The Democratic governor signed the veto on the air during WTOP radio’s “Ask the Governor” program.  “We can’t tolerate that,” McAuliffe said. “We cannot have fear and persecution.”

The bill passed 59-38 in the House of Delegates and 20-19 in the Senate during this year’s General Assembly session.

“This legislation is also bad for business and creates roadblocks as we try to build the new Virginia economy,” McAuliffe said in a statement with the veto. “Businesses and job creators do not want to locate or do business in states that appear more concerned with demonizing people than with creating a strong business climate.”

CEOs employ gay people and don’t look favorably on such legislation, he said.

LGBT rights group Equality Virginia said the bill was one of nine this year “targeting gay and transgender individuals, signifying an unprecedented amount of LGBT-centric legislation filed in one legislative session.”

What such bills are really all about is the Christofascists' sick desire to punish those who no longer accept their toxic religious beliefs and who refuse to live their lives ruled by hate and fear.  In addition, as modern science and knowledge increasingly demonstrate that the Bible is wrong on many fronts, the "godly folk" cannot tolerate anything that jeopardizes their house of cards religious belief constructs or which - God forbid - might require them to think and ignore the rants of parasitic clergy in pulpits.  The more the Christofascists' world view is challenged, the better off the nation will be.