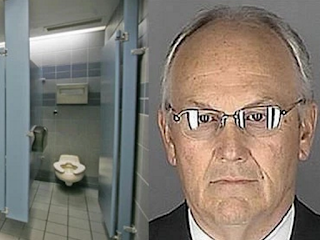 One of the scare tactics used by Republican legislators in Georgia and North Carolina (as well as here in Virginia) to push for passage of anti-gay and anti-transgender laws is to depict transgender women as a threat in restrooms - seemingly, no thought was given to the consequences of forcing transgender men to use women's rooms.  The irony, however, is that there are ZERO cases of transgender individuals engaging in misconduct in restrooms.  The same cannot be said for Republican legislators themselves.  A piece in Gay Star News looks at this reality that it is Republicans legislators who are the most serious threat in restrooms.  Here are highlights (check out the link to a list of Republicans involved in sexual misconduct):

[S]tatistics show no trans person arrested for sexual misconduct in a public bathroom, BUT surprise, surprise (or not?), three Republicans lawmakers had been arrested for doing very naughty things in there. Who are they?

Well the guys at Newnownext didn’t have to dig too far into recent history to find these bathroom-seeking politicians:

Back in 1981, Mississippi congressman Jon Hinson was arrested for engaging in oral sex with a male staffer in the House of Representatives bathroom.

In 2007, Idaho Republican Larry Craig was arrested in the restroom of Minneapolis-St. Paul International Airport for soliciting sex from an undercover police officer.

Also in 2007, Florida state Representative Bob Allen was arrested after he agreed to give an undercover police officer $20 for oral sex in the men’s room of a public park.

Well, since we are on the topic of hypocrisy, here’s an extensive list of the biggest sex offenders coming from the U.S. Republican Party.

Oh, and one more person to add to the list: Alabama Governor Robert Bentley.