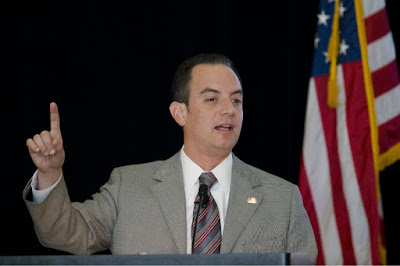 The RNC likes to act as if the anti-LGBT measures being filed in state legislatures is the result of local desires and initiatives rather than part of a national campaign akin to what was done in 2004 with anti-gay marriage constitutional amendments aimed at turning out the Christofascist vote.  Now, as Pink News is reporting, behind the anti-gay and anti-trans efforts across America is a RNC resolution pushing Republicans at the state level to once again use anti-LGBT animus to stir up the hideous Christofascist base of the party in the run up to the 2016 federal elections.  It's no coincidence that hate group leader (and KKK lover) Tony Perkins has again been appointed to the GOP Platform Committee.  Here  story highlights:

A resolution passed by the Republican National Committee (RNC) has shown the party is coordinating trans discrimination on a national level.

It was passed and approved by Republican National Committee Chairman Reince Priebus where he condemned President Obama and his “government overreach”.

“The Republican National Committee calls on the Department of Education to rescind its interpretation of Title IX that wrongly includes facility use issues by transgender students,” the resolution reads.

“The Republican National Committee encourages state legislatures to enact laws that protect student privacy and limit the use of restrooms, locker rooms and similar facilities to members of the sex to whom the facility is designated.”

A number of states have already taken up the party’s call including Virginia, Indiana and Tennessee, but some critics have said this top down approach by the GOP goes against its overarching ethos of small government.

Elsewhere in the country, a number of bills sit before state legislatures aimed at discriminating trans people.

In Indiana, Senator Jim Tomes wants to make it illegal for people to use a bathroom that isn’t for their biological gender.

In Tennessee, a lawmaker is trying to prevent schools from building gender neutral bathrooms and in Florida, a Miami-based Republican is saying the state should follow North Carolina’s lead.