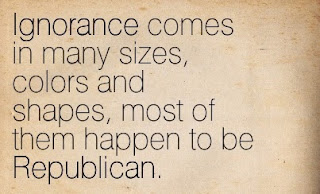 With more and more sane and rational people fleeing a Republican Party that seems obsessed with sinking to the lowest common denominator among its increasingly racist, ignorance embracing party base, the rest of the world must think that America has had a collective nervous breakdown.   What is perhaps most frightening is that the GOP's decent into full insanity is accelerating and one is seeing things ranging from Donald Trump's suggestion that he would take the nation to war with China to the party's full surrender to Christofascists who want a Christian theocracy rather than constitutional government.  A column in the New York Times looks at the GOP's apparent death wish.  Here are excerpts:

Whatever one may think about the current president and the two Democrats duking it out to replace him, you have to admit that they have, by and large, conducted themselves with an admirable level of civility and couth becoming of the office.

Not so for their Republican counterparts. Indeed, the entirety of the Republican Party seems dead set on convincing voters that it has lost its way and is spinning out of control, consumed with anger and devoid of answers. The two leading Republican presidential candidates engaged this week in a crude, sophomoric tiff involving insults of each other’s spouses.  A nude picture of the front-runner’s wife was used in a Facebook ad.

The poor choices and poor behavior of Republicans are not confined to the presidential candidates. Senate Republican leaders still haven’t agreed to grant a hearing for the president’s Supreme Court pick, Merrick Garland, even when a new CNN/ORC poll found that approximately two-thirds of Americans want Garland to get a hearing and 57 percent agree that President Obama was right to make the appointment to fill the seat. Another finding from the poll, released earlier this week, found the Republican Party’s favorability also at its lowest point since that [2013 government] shutdown.”

And then there is what’s happening on the state level. On Wednesday, in a special session of the Republican-led North Carolina legislature, lawmakers pushed through a bill that a New York Times editorial called “appalling” and “unconstitutional.” The bill “bars transgender people from using public restrooms that match their gender identity and prohibits cities from passing anti-discrimination ordinances that protect gay and transgender people.” The Republican governor, Pat McCrory, signed the bill into law on Wednesday and tweeted: “Ordinance defied common sense, allowing men to use women’s bathroom/locker room for instance. That’s why I signed bipartisan bill to stop it.”

When Republican officials aren’t being infantile, they’re being archaic.The future of this country bends toward more inclusion and acceptance, regardless of our occasional regression. This country needs a president who doesn’t pout or get lost in puerile protestations.

I understand that Republican voters are filled with an insatiable anger stemming from unbridled electoral enthusiasm that still failed to halt unremitting social change, or elect their hopelessly unimpressive recent presidential candidates. But they are allowing themselves to be led out of the mainstream, over a cliff and into oblivion.

America is watching the Republican Party demonstrate its headstrong desire to self-destruct. I’m guessing most of America is not amused.