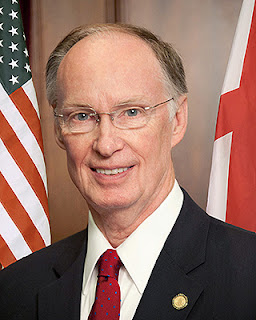 As I have noted before, it is almost ALWAYS the "family values" Republicans who find themselves being exposed (and deservedly so) in sex scandals.  Whether it is cheating on the spouse with same sex paramours or getting caught in gay sex scandals like former Virginia 2nd District Congressman Ed Schrock, it's always these who bloviate the most about so-called Christian and family values who prove themselves to be nothing more than despicable liars and hypocrites.  A case in point is viciously anti-gay Alabama GOP Governor Robert Bentley who finds himself in a sex scandal.  Having lived in Alabama years ago, I know first hand that other than perhaps Louisiana, no one does scandal better than Alabama.  The Washington Post looks at Bentley's hypocrisy and who the scandal assumed a life of its own.  Here are excerpts:

Anyone who has doubts about the importance of journalists in 2016 need be acquainted only with the reporting team at AL.com, the largest statewide news organization in Alabama. The group's reporters cracked open a scandal involving their governor's alleged infidelity last week and have been covering the unpredictable fallout aggressively ever since.

This scandal didn't come to them overnight; they've been hearing rumors of an affair between Gov. Robert Bentley (R) and his top political adviser, Rebekah Caldwell Mason, for months. The story finally broke open on March 22 when a fired top law enforcement official went on the record to AL.com's John Archibald about the alleged affair and offered proof. Faced with damning evidence of a taped phone conversation to a woman named Rebekah, Bentley has denied he had an affair, but few in a state accustomed to scandal believe him.

Alabama lawmakers, led by Republicans, are looking at ways to impeach him or set up a recall. An informal online AL.com poll found that 90 percent of about 30,000 respondents said Bentley should resign. Mason resigned Wednesday.

The story stretches far beyond sex, though. It's also connected to an ethics trial of the House speaker and a shadowy nonprofit that paid Mason's communications firm about $320,000 at the time of her resignation. As AL.com reporter Leada Gore said: "It's got every part of a scandal you could want."

[T]he speaker of the House, Mike Hubbard (R), is indicted on corruption charges. That has dragged on forever. So the governor has this old-time friend who was a legislator with him who he puts in charge of our state law enforcement agency. They get crossways -- which is an Alabama term you can use -- over the handling of an affidavit they are seeking related to the speaker's trial. The top cop says, 'I'm going to give this affidavit because I'm not going to lie to the grand jury about some of the things going on.' The governor supposedly told him not to. When Spencer Collier [the top cop] gave that affidavit, the governor fired him.

Then Spencer Collier became the first person willing to go on the record to say, 'Yes, there was an affair.' That's what happened last week that broke it all open.

Our state auditor has filed an ethics investigation, which in Alabama is extremely serious. There's also a state complaint saying he misused funds.

Mason has resigned her post. Her husband, who is a state employee -- of all things the director of the state faith-based initiative office -- is still there.

And then you get into all this crazy stuff. They all went to church together in Tuscaloosa. They've been asked to leave; he's no longer a deacon. We reported today her husband operated a separate communications company that was not on her ethics forms that received payments from the University of Alabama. And to make it even more of a tangled web, the chairman of the 501(c)(4) that the governor set up is the legal adviser to the board of trustees to the University of Alabama.

Note the fact that the alleged adulteress' husband holds a "faith based" state office.   About the only thing more fun would be to find out that Victoria Cobb of The Family Foundation is engaged in a torid lesbian affair. :)
Posted by Michael-in-Norfolk at Thursday, March 31, 2016