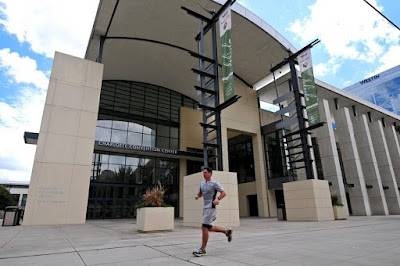 As noted in the prior post, a federal lawsuit has been filed challenging North Carolina's Republican backed anti-LGBT license to discriminate law.  More on this will follow.  But first, it is noteworthy to see the manner in which this special rights for Christofascists law is already harming the state.  First, New York State has banned all state employee travel to North Carolina.  Second, the High Point Furniture Market - a huge concern in the world of furniture - has felt compelled to release a press statement in the wake of the notifications it is receiving from customers who will be boycotting the Market this year.  Here are highlights:

High Point, NC, March 28, 2016 —In the last few days, dozens of customers have contacted the High Point Market Authority to inform us that they have cancelled plans to attend the Market in April due to passage of HB2. There are also several campaigns on social media calling for a boycott of the High Point Market this spring.

As leaders and organizers of the High Point Market, we feel an obligation to inform the public and our government leaders in Raleigh of the significant economic damage that HB2 is having on the High Point Market and on the North Carolina economy. Based on the reaction in just the last few days, hundreds and perhaps thousands of our customers will not attend Market this April.

We believe it is vital for them [legislators and state agencies] to be kept informed of the public’s reaction to HB2, and to the significant economic damage that this controversy is causing.

Meanwhile, the City of Charlotte is already seeing cancellation of plans for conventions and events in that city.  Here are highlights from the Charlotte Observer:

Tom Murray, president and CEO of the Charlotte Regional Visitors Authority, said Monday the group is “extremely concerned” about the controversial new legislation, and it continues to hear “negative feedback and potential event cancellations” from customers.

Some would-be customers have withdrawn their interest in Charlotte as a host destination, the CRVA said, though the group declined to say how many or which customers. No existing conventions have canceled yet, Murray said.

“On behalf of the visitor economy that represents one in nine jobs across the Charlotte region, we strongly urge that state and local leaders find a resolution that represents the best interests of our city and state,” Murray said. “This issue is in danger of setting us back from the progress we’ve made in positioning Charlotte as an attractive, inclusive destination,” Murray said.

Tourism and hospitality serves as the Charlotte region’s fourth largest industry, generating more than $6.3 billion a year, according to the CRVA, a public organization supported by taxes on hotel and motel rooms and restaurant and bar tabs. Those tax dollars can be used only to promote the city or for tourism projects and research.


It is important to remember what is ultimately behind this vicious law: the desire of Christofascists to feel superior to others and to punish those who fail to conform to their fear and hate based religious beliefs.


In terms of the lawsuit filed yesterday to challenge this anti-LGBT law, The New Civil Rights Movement has details.  Here are highlights:

Two civil rights groups and three people have joined to file a lawsuit against North Carolina over HB 2, the discriminatory anti-LGBT law the General Assembly passed and Gov. Pat McCrory signed into law on March 23.

Citing the 14th Amendment and Title IX of the Education Act of 1972, the suit names Gov. Pat McCrory, Attorney General Roy Cooper, the University of North Carolina, its Board of Governors, and several UNC officials as defendants.

“By singling out LGBT people for disfavored treatment and explicitly writing discrimination against transgender people into state law, H.B. 2 violates the most basic guarantees of equal treatment and the U.S. Constitution,” the 45-page lawsuit charges.

The suit clearly notes the anti-LGBT animus that lawmakers displayed when they "rushed to convene a special session with the express purpose of passing a statewide law that would preempt Charlotte’s 'radical' move to protect its residents from discrimination."

"In a process rife with procedural irregularities, the legislature introduced and passed H.B. 2 in a matter of hours, and the governor signed the bill into law that same day," the lawsuit states. "Lawmakers made no attempt to cloak their actions in a veneer of neutrality, instead openly and virulently attacking transgender people, who were falsely portrayed as predatory and dangerous to others. While the discriminatory, stated focus of the legislature in passing H.B. 2—the use of restrooms by transgender people—is on its own illegal and unconstitutional, H.B. 2 in facts wreaks far greater damage by also prohibiting local governments in North Carolina from enacting express anti-discrimination protections based on sexual orientation and gender identity."

Holden and Geidner note that in "17 states and 225 cities with laws banning LGBT discrimination, there are no known instances of the rules being used to defend or facilitate predatory behavior in bathrooms or locker rooms."