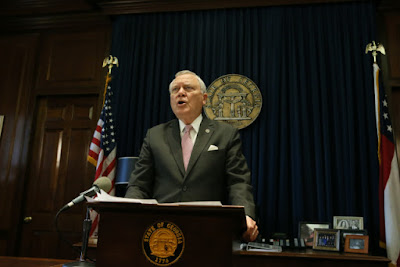 Yesterday, after much pressure from the Georgia Business community and seeing a lawsuit filed against North Carolina's heinous anti-LGBT law, Georgia Governor Nathan Deal vetoed the lie based "religious liberty" law rammed through the Georgia legislature by Republicans stampeding to prostitute themselves to Christian extremists in that state.  The true irony is that it is LGBT Georgians, not the Christofascists, who lack protection under Georgia law.  This bill, like all of the falsely named religious freedom or religious liberty bills would have created special rights for far right Christians and enshrined their toxic, hate based beliefs into the state law.  The Atlanta Constitution looks at yesterday's action by Governor Deal.  Here are excerpts:

Gov. Nathan Deal on Monday vetoed the “religious liberty” bill that triggered a wave of criticism from gay rights groups and business leaders and presented him with one of the most consequential challenges he’s faced since his election to Georgia’s top office.

In a press conference at the state Capitol, Deal said House Bill 757 doesn’t reflect Georgia’s welcoming image as a state full of “warm, friendly and loving people” – and warned critics that he doesn’t respond well to threats of payback for rejecting the measure.

“Our people work side by side without regard to the color of our skin, or the religion we adhere to. We are working to make life better for our families and our communities. That is the character of Georgia. I intend to do my part to keep it that way,” he said. “For that reason, I will veto HB 757.”

The two-term Republican has been besieged by all sides over the controversial measure, and his office has received thousands of emails and hundreds of calls on the debate. The tension was amplified by a steady stream of corporate titans who urged him to veto the bill – and threatened to pull investments from Georgia if it became law.

It is also likely to herald a more acrimonious relationship between Deal, who campaigned on a pro-business platform, and the evangelical wing of the Georgia Republican party. Already, prominent conservatives have vowed to revive the measure next year.

The governor, though, had ample cover from the measure’s critics. Executives from dozens of big-name companies, including Disney, Apple, Time Warner, Intel and Salesforce, called on the governor to veto the bill. The NFL warned it could risk Atlanta’s bid for the Super Bowl and the NCAA hinted it could influence the state’s ability to host championship games. And Deal’s office said two economic development prospects have already abandoned Georgia because of the legislation.

They joined with gay rights groups who warned that the measure amounts to legalized discrimination and pointed to the corporate outrage that rocked Indiana after a similar measure was signed into law there.

The legislation, which first surfaced on March 16 and passed both Republican-controlled chambers in hours, would allow faith-based organizations to deny services to those who violate their “sincerely held religious belief” and preserve their right to fire employees who aren’t in accord with those beliefs.

[T]he governor said earlier this year that he would reject any measure that “allows discrimination in our state in order to protect people of faith.” Rooting his critique in biblical language, he urged fellow Republicans to take a deep breath and “recognize that the world is changing around us.”

He is also the rare statewide politician who can afford to infuriate a wide swath of his party’s base. As a term-limited governor with no further political ambitions, he never has to face the voters again.

Already, several conservative lawmakers have vowed to call for a “veto session” to rebuke the governor if he rejects the measure. It takes a three-fifth majority in both chambers to call a special session, and a two-thirds majority in both chambers to override a veto — a threshold the bill failed to reach by one vote in the Senate and 16 in the House.

Two thoughts: First, when is the media going to drop the ludicrous phrase "religious conservatives"? These people are extremists and it is far past time that they be called out as what they really are, the Christian Taliban.  Second, the Christofascists need to be driven from the public square and forced to crawl back under the rocks they slithered out from under. A modern, knowledge based society has no place for those who embrace and worship ignorance, hate and bigotry.
Posted by Michael-in-Norfolk at Tuesday, March 29, 2016