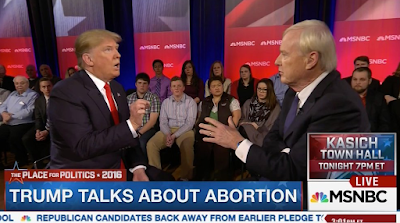 Throughout his campaign, Donald Trump has seemingly sought to alienate as many demographic groups as possible.  With his latest misogynistic remarks about women and abortion (and his past comments are equally bad), he has added women to the list of voters who basically hate him by large margins.  Meanwhile his GOP opponents - who in actuality are little better than Trump when one looks ta their records - and Hillary Clinton and Bernie Sanders must be salivating. The take away?  If Trump is the Republican nominee, he may lead the GOP to a serious defeat and set the party back for a decade or more.  There simply are not enough uneducated white male voters to counter balance the massive negatives that Trump holds with women, blacks, Hispanics, and non-Christofascists.  A piece in Politico looks at what might be the beginning of the end for The Donald. Here are highlights:

Just how bad are Donald Trump’s problems with women? Bad enough that roughly seven out of 10 women voters in recent polls say they have a negative impression of him. And that was before the news coverage of his threat to “spill the beans” about Ted Cruz’s wife and his talk about punishing women who have abortions.

Trump is already so dangerously underwater with female voters – who represent a majority of the electorate -- that it raises questions about whether a GOP ticket led by the billionaire could lead to a historic gender gap and blowout defeat.

“Those are stunningly unfavorable numbers. It would be tremendously difficult for Donald Trump to win the general with those kinds of numbers,” said Tim Malloy, assistant director of the Quinnipiac University poll. “Historically, I can’t imagine anyone having worse numbers with women. But historically, there’s never been anyone like Donald Trump.”

Trump does not acknowledge the deficit he faces with women voters, and has instead claimed that he will be “the best thing that ever happened to women.”

If Trump does win the nomination and heads to the general election, he faces a daunting demographic reality among a statistically important sub-group: white women. The most recent ABC News/Washington Post poll shows white women, who have voted Republican as a whole in each of the past four elections, have a terrible impression of Trump: Only 29 percent view him favorably, compared to 68 percent who have an unfavorable opinion of him. Head-to-head polls of registered voters released this month -- all of which put Trump significantly behind Hillary Clinton overall -- show massive Clinton leads among female voters. A Quinnipiac University poll placed Clinton at 16 points ahead of Trump among women. Clinton also led among women by 19 points among women in a Fox News poll, and by 27 points in a CNN/ORC poll.