Too Many Risks to Virginia Offshore Drilling? 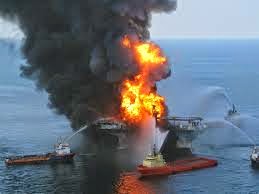 President Obama has indicated that he wants to open areas offshore from Virginia's coast for oil and gas exploration.  The move has outraged environmentalists while thrilling Virginia Republicans who never seem to pause to worry about potential disasters that could happen.  As always, there is talk of creating new jobs, but as a former in-house attorney for a major oil company some years ago, I remain very skeptical about boasts of the number of jobs created.  From my experience, most of the technical workers would be imported in from elsewhere and send their earnings back to their home states and at best Virginia would see increases in rentals of some office space, residential housing rentals, and some small amount of business for local marine suppliers.   A column in the Virginian Pilot looks at the risks involved.  For those who don't know, the American Petroleum Institute is a lobbying arm of the major oil companies and its "studies" are about as reliable as something coming out of The Family Foundation on gays.  Here are excerpts:

IT TAKES a lot of assumptions to conclude that offshore drilling will benefit Virginia:

-- That the Navy will reverse years of analysis and decide that drilling poses no danger to its training mission offshore or its installations onshore.
-- That oil companies won't imperil Hampton Roads' tourism and commercial fishing with a spill, as has happened everywhere else.
-- That despite years of resistance, every state in America will now agree to simply hand over royalties to Virginia.
-- That Maryland and North Carolina won't care when Virginia tries to seize their territory.
-- That oil jobs - notoriously transient and temporary - will abandon places like Texas and Louisiana for Hampton Roads.
-- That a time with some of the lowest gas prices in recent history is also the time to start drilling for some of the most expensive oil and gas on the planet.

Despite all that, the White House' decision Tuesday to allow drilling off four Southeastern states was cheered by pro-petroleum politicians and their supporters. Among the parcels included was "Lease Sale 220," off Virginia's coast.

U.S. Rep. Scott Rigell, as he has before, claimed that offshore drilling would "create 25,000 good-paying jobs for Virginians." The source of that number - which has risen from 19,000 in recent years - is a study commissioned by the American Petroleum Institute. The same report concludes that Atlantic coast offshore drilling would produce 279,562 jobs by 2035.

It's not likely to do so without imperiling others.   The U.S. Navy uses the Atlantic Ocean off the coast of Virginia for training. In 2010, the military concluded that 72 percent of the "Lease Sale 220 area should have no oil or gas activity due to our intensive training and testing in the area and the danger this would present to oil and gas industry personnel and property."

Sessoms, Warner, Kaine and Rigell - indeed, every elected official in Virginia - is acutely aware that Oceana Naval Air Station was nearly gutted in 2005, after the Defense Base Closure and Realignment Commission decided houses and businesses had been allowed too close to the fence line. There was serious consideration of moving the Navy's East Coast master jet base to Florida, a prospect that would have hollowed Hampton Roads.

Navy officials aren't likely to welcome drilling in the Virginia Capes, especially after the military has warned repeatedly of the dangers, including in 2006:

"Any structures built in the water... would restrict where military air wings can fire their weapons, drive aircraft further away from the coast, increase fuel costs and wear and tear on the airframes, increase flight times en-route to training areas, and increase the risk to aircrews...."

No matter what great benefits proponents promise, the dangers are real: To Navy operations, to the environment, to the tourism industry, to commercial fishing.

None of these cautions is likely to deter drilling supporters, who've proven themselves willing to make the assumptions necessary to support the petroleum industry. Experience shows the dangers are more likely than 279,562 jobs.

The threats are greater than the promises that the Hampton Roads economy and environment won't be damaged by an industry with a long history of destruction.

Sadly, I agree with the editorial, not that this will deter the pawns in the pockets of the petroleum industry.
Posted by Michael-in-Norfolk at Friday, January 30, 2015