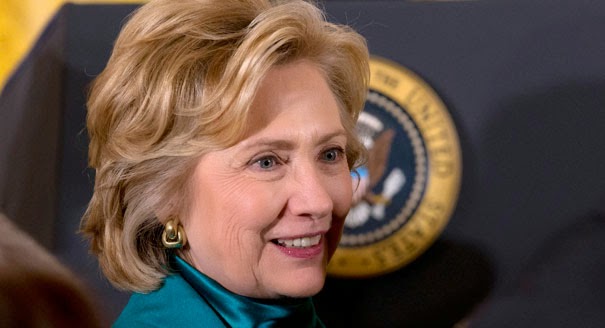 Although she has as yet not announced her candidacy for president in 2016, as Politico is reporting, Hillary Clinton appears to be readying her campaign - some say it's now 100% certain she is running.  Many believe that she must avoid the sense of her nomination being inevitable and that she hopefully learned from the blunders made during her nomination contest with Barack Obama in 2008.  Here are excerpts from the article:

Not only is she running, but we have a very good idea of what her campaign will look like.

Hillary Clinton is in the final stages of planning a presidential campaign that will most likely be launched in early April and has made decisions on most top posts, according to numerous Democrats in close contact with the Clintons and their aides.

Campaign advisers say the likelihood of a campaign, long at 98 percent (she never really hesitated, according to one person close to her), went to 100 percent right after Christmas, when Clinton approved a preliminary budget and several key hires.

Most of the top slots have been decided, with one notable exception: communications director, a job that is now the subject of intense lobbying and jockeying among some of the biggest names in Democratic politics. One top contender is White House communications director Jennifer Palmieri, who is close to likely campaign chairman John Podesta.

Numerous lessons from Clinton’s failed 2008 campaign are being baked into the 2016 plan, including a determination to improve relations with the news media — or, at the very least, to have a “good cop” role to help her get off on a better foot with the journalists who will help shape her image.
Reflecting other lessons learned, the campaign is being planned with more of a “big-tent mentality,” as one adviser put it. And Bill Clinton is being integrated from the start, after feeling isolated from parts of her campaign against Barack Obama.

One component of Hillary Clinton’s emerging strategy involves quietly but aggressively courting key endorsers from the left, who could help increase progressives’ comfort level and take the wind out of a potential challenge. Two top targets: Robert Reich, the economist and former labor secretary in her husband’s administration, and Rep. John Lewis (D-Ga.), the civil rights icon.

The exact timing of Hillary Clinton’s launch is unknown, but close allies expect her to officially enter the 2016 race shortly after the end of this quarter, so that her first fundraising report will be a blockbuster. On March 4, the Clinton Foundation holds its annual gala in New York, with entertainment by Carole King, and it’s expected to be one of the Clintons’ final major events before the campaign.

Friends and advisers say she is planning this campaign “her way,” without being buffaloed by outside pressure.  “She is taking her time,” one adviser said. “Part of doing something right is … taking the time to balance the advice she is getting with her own thoughts.

Clinton will enter the Democratic race with a bang — and virtually no opposition to speak of. Sen. Elizabeth Warren (D-Mass.), who could mount a serious campaign from the left, has said she won’t run, and is making no behind-the-scenes preparations. Vice President Joe Biden says he might very well run — but mainly wants his name in the mix in case Clinton implodes.

Some advisers expect a push for diversity on the ticket. So the shortlist also is expected to include Housing and Urban Development Secretary Julián Castro, Labor Secretary Tom Perez, Sen. Cory Booker of New Jersey and perhaps California Attorney General Kamala Harris, who is running for U.S. Senate.

Clinton has recruited two of the top brains of the Obama campaign — pollster Joel Benenson and media strategist Jim Margolis, who worked for her husband’s campaign in 1992. Now that the architecture of the campaign is clear, the two are helping with the next critical task: developing her message.

No doubt Hillary is also hoping that the GOP primary contestants will damage each other as much as possible as they struggle to remain in the GOP clown car.