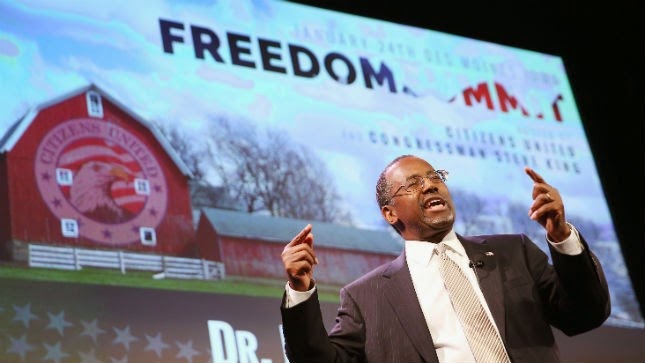 The prior post looked at the problem of the inability of some, especially on the American right to see the common humanity of others who are different.   For an example of this sickness, as I see it, look no father than would be GOP presidential nominee Ben Carson who, after speaking at the misnamed "Freedom Summit" in Iowa, joked about poisoning the wedding cakes for same sex couples.  Never mind that many others besides the gay couples would be harmed, including children and family members.  While it may seemed far fetched that someone might actually follow through on such a suggestion, one must remember that from many pulpits individuals hear that gays are worthy of death and similar messages against abortion providers have indeed resulted in murder.  The Hill looks at Carson's foul "joke."  Here are highlights:

But the former doctor and Fox News commentator may need to sharpen his policy chops if he wants to become a top-tier player. Carson struggled at times through a post-speech press availability, offering vague answers on a number of topics and refusing to answer how he thinks abortion should be criminalized.

Carson also criticized political correctness as he answered a question about gay marriage — and followed up by flaunting decorum with the type of comment that endears him with the base but could hurt his cross-party appeal.

"What I have a problem with is when people try to force people to act against their beliefs because they say 'they're discriminating against me.' So they can go right down the street and buy a cake, but no, let's bring a suit against this person because I want them to make my cake even though they don't believe in it. Which is really not all that smart because they might put poison in that cake," he said to chuckles from some of his staff and dead silence from the journalists in the room.

Well, in a sense he has a point. Why should I want a bigot homophobe to bake our wedding cake?