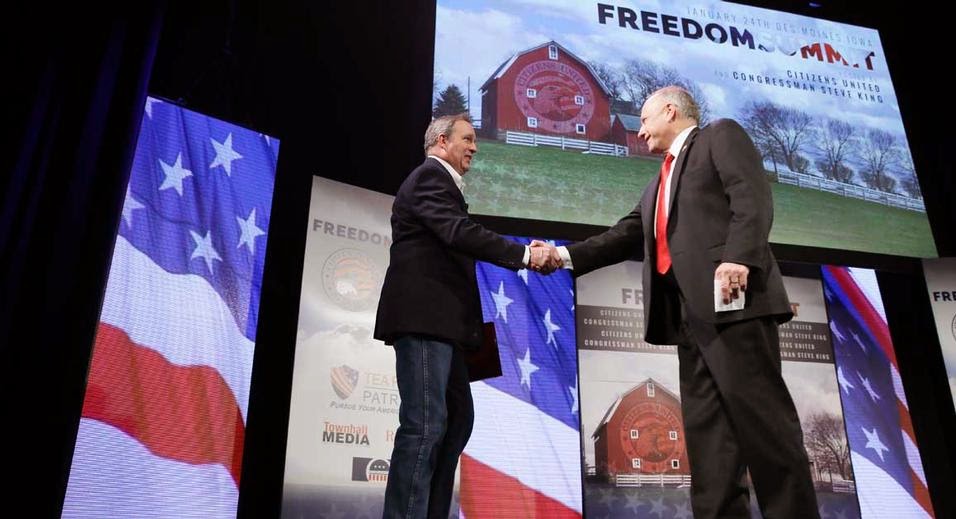 Yesterday's "Freedom Summit" in Iowa orchestrated by Rep. Steve King, was as expected a gathering of far right extremists.   Some described the event as a "Extremist Ring Kissing" event.  One has to wonder how those in attendance who pandered to the ugliest elements of the GOP base can have any chance of drawing votes from sane, moderate and minority voters in the general election.  A piece in Politico states that the Republican Party’s clown car has become a clown van.  Here are article excerpts:

The Republican Party’s clown car has become a clown van.  With nearly two dozen possible presidential candidates, the GOP is having a seriousness deficit. There can’t possibly be that many people who are real candidates.  But they can ride in the clown car from event to event, and nobody can stop them.

At the Freedom Summit here Saturday, two dozen speakers ground through 10 hours of speeches in front of more than 1,000 far-right Republicans.

As it turned out, clown car candidates are not necessarily funny. Since they have nothing to lose, they can attack their fellow Republicans with abandon.

Usually they attack from the right, which can force the eventual nominee farther to the right than the nominee wants to go. This risks losing moderate voters in the general election.

This was not a concern at the Freedom Summit, however. The farther to the right, the better.
It was a classic cattle call, with speaker after speaker pandering to the crowd. Sometimes, however, pandering was not enough.

In the circus, the worse thing clowns lob is confetti. In the political circus, the clowns lob grenades. Verbal, to be sure, but they still can be deadly.

Neither Bush nor Romney bothered to show up at the summit, so they missed a day of attacks.

Donald Trump, who definitely rides in the clown car — or maybe the clown limo — strongly indicated he might actually run for president. What mattered, however, was his grenades.
“It can’t be Mitt,” Trump said, the bright overhead stage lighting, not favoring, his elaborate comb-over. “Mitt ran and failed!”  Applause from the crowd.

Jim Gilmore, former governor of Virginia, did the same attacks, though without using any names, on Jeb Bush for supporting Common Core, a nationwide educational initiative, and on Romney for his health plan as governor of Massachusetts.

But then Gilmore added another enemy of the GOP right wing. “Do we want a nominee who wrapped his arms around Barack Obama?” Gilmore said.

The clear reference to Chris Christie brought bellows and barks of approval from the crowd.

[T]he day was filled with Republicans acting like third graders.