The Far Right Targets Pope Francis as a "Leftist" and "Marxist" 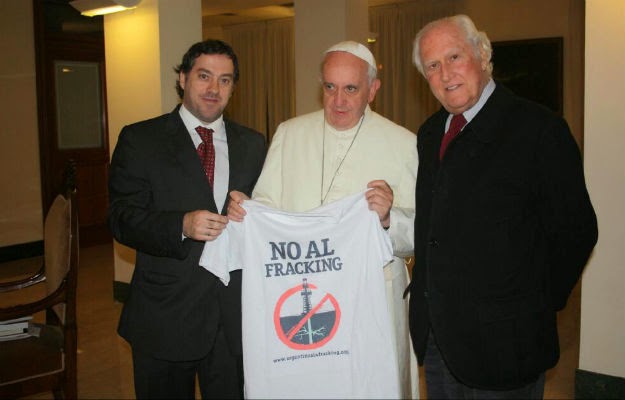 As noted before, Pope Francis has hit a raw nerve with the American far right as a result of his statements condemning vulture capitalism and now his upcoming encyclical on climate change.  The result?  Among others, a hatchet piece in The Federalist that describes Francis as a "leftist" and a "Marxist."  Tellingly, among the slurs are claims that Francis is not a scientist even as the author ignores the reality that 95% of scientists believe that climate change is occurring and that mankind is a contributing cause.  The following are highlights from the slurs being thrown at Francis:


She [Rachel Lu] cites criticism of Francis as evidence of a “war.” A Republican war at that. Doing so, she strays into the same reductive trap set by the mainstream media that she wants conservatives to avoid.


Under the tutelage of a pope who ascribes to himself an omnicompetency in geopolitical and scientific matters, the Catholic Church is at risk of a death walk of its own. Its descent into a left-leaning political entity is underway while we circle the wagons and measure our tones. It is a serious matter when a pope confuses political and ideological symbols for religious ones.

Civil society has an immense stake in that confusion. And the stakes are raised when papal preferences, masked in a Christian idiom, align themselves with ideological agendas (e.g. radical environmentalism) that impinge on democratic freedoms and the sanctity of the individual.
Francis, raised in Argentina during the apogee of Peronism, gives every evidence of tilting toward the state.

[L]et us go back to that for a moment. “Francis and Political Illusion” included a photo of the pope standing between two environmental activists and holding an anti-fracking T-shirt. . . . . And these were not just any activists. The older of the two men in the photo is Fernando Solanas, an Argentine film director, avowed propagandist, and politician. A key player in Buenos Aires, he ran for president of Argentina on the Socialist ticket in 2007 and stood for the senate last year. In the 1960s, he co-founded the influential, radical film collective Grupo Cine Liberación (The Liberation Film Group) with Octavio Gettino, Both were Marxists and supporters of Juan Perón at the time.

Francis is no naïf. He signals his priorities to anyone paying attention. You do not have to be a Republican or a conservative to get the message. In support of his green theology, he plans a speech at the United Nations and a congress of world religious leaders at the Vatican. He is preparing to lend this agenda the magisterial weight of an encyclical. Yet, when innocents are slaughtered in Paris by the same forces that are shedding Christian blood in the Middle East, the most he can muster is a hashtag, #PrayersforParis.

Let us be honest. Conservatives are damned if they do, damned if they don’t. While deferential observers are measuring their tones, Francis drives ahead with a demagogic program which makes the state the guardian and enforcer all values.

This past October, Francis took aim at “ideological Catholics,” calling them “a serious illness” within the Church. What is Francis, if not an ideologue?

The real fear of the far right and Republican Party?  That Francis might just open the eyes of Catholics to the true ugliness of the GOP's reverse Robin Hood policies and the rape and pollution of the Earth that are pillars to the GOP agenda.  The fact that this agenda is the antithesis of the Gospel message matters not at all to today's "conservatives."
Posted by Michael-in-Norfolk at Wednesday, January 28, 2015