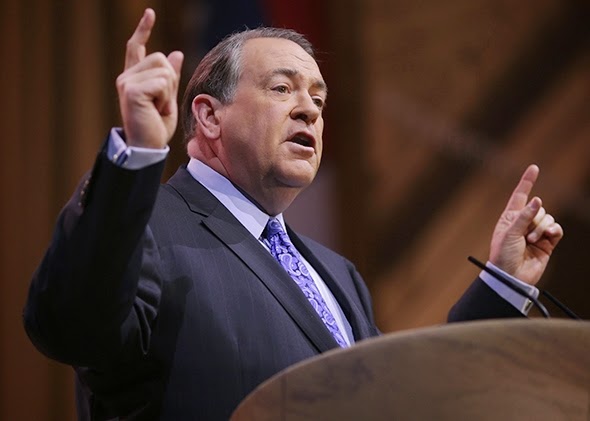 Mike Huckabee - the man who admitted that he wanted to replace the U.S. Constitution with the Bible as America's "guiding governmental document" - remains popular with the insane, lunatic Christofascist base of the Republican Party.  He also forces other less mentally unhinged Republicans, especially would be potential 2016 presidential candidates to move to the LaLa land of the far right in order to court the ugly elements of the party base.  A piece in Salon looks at Huckabee's - and by extension, the GOP's - hateful true colors.  Here are excerpts:

During a recent radio appearance, former Arkansas governor and Fox News host Mike Huckabee continued his recent “police-women’s-behavior” tour, which in the past several weeks has most prominently featured his daring public criticisms of Beyoncé. On Friday, during an interview with Iowa-based radio show Mickelson in the Morning, Huckabee criticized the “trashy” women of Fox News who have the audacity to curse around the office.

I actually want to thank the Huckster for his candor here. When the Baptist minister-turned-politico first arrived on the national scene, he had a reputation for his general niceness — he was “easy to like” and there were plenty of “I Heart Huckabee” references to go around.

But even back in 2008 — way earlier than that, in fact! — Huckabee aligned himself with ideals that were fundamentalist at best and hateful and bigoted at worst (remember that 1992 Senate bid when he suggested AIDS patients be forcibly isolated, which he refused to renege during his 2008 presidential campaign?). His public image as a softy didn’t quite match with his assertions that homosexuality, for instance, is “an aberrant, unnatural, and sinful lifestyle.”

In recent years, though, it feels as if we’ve gotten to know the real Huckabee hiding beneath his cultivated political persona, especially when it comes to his views on women. In 2011, he criticized actress Natalie Portman for the “unfortunate” way she managed “to glorify and glamorize the idea of out of wedlock children” while pregnant, a precursor to his recent outrage at Queen Bey; the following year, he labeled it a mistake for Republicans to jump ship when former Rep. Todd Akin’s comments about “legitimate rape” were “blown out of proportion.” And 2014, of course, was nearly overflowing with Huckabee’s sexist wisdom: there was his response to the contraception mandate, in which he called out women for relying on “Uncle Sugar” to provide birth control because they “cannot control their libido,” . . .

Now, Huckabee has taken it one step further by denigrating women — his own former colleagues — in as straightforward a way as one could muster. He has gone from seemingly kindhearted patriarch (maybe of the “agree to disagree” variety) to all-out grandpa-after-a-few-too-many-drinks in his sexist honesty. And, in a way, it’s a nice change of pace from the other wingnuts in Huckabee’s party who would have voters believe they aren’t garden-variety conservative loony tunes when, indeed, they are.

And while we’ve known for some time that Huckabee’s views are, well, terrifying, they’d been masked in such a way that once set him apart. But now, the real Huckster — in all his sex-panicked, purity-centric, woman-policing glory — is who we get to deal with. At least we know exactly what we’re up against.