How the Germans Invented Gay Rights a Century Ago. 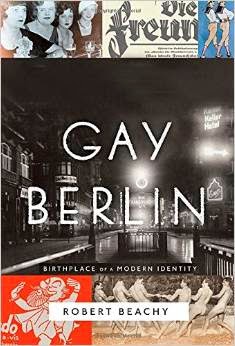 The modern day concept of homosexuality is not much older than 100 years old.  Meanwhile, as the scholar work, "The Origins and Role of Same-Sex Relations in Human Societies" demonstrates, outside of Christian Europe where mentally disturbed and sexually conflicted "church fathers" had waged a war against all things sexual, societal acceptance of same-sex relations was the norm until the Christian missionaries inculcated their sexual neurosis on other societies.  Be it "shudo" in Japan, the "two spirited" or "berdache" of the North American Native Americans, or the sayings of the "Al Hadis" in Muslim lands, same-sex love and relationships were recognized and accepted.  Once the Christian missionaries exported their neurosis around the globe, it was in Germany over a cetury ago that a homosexual identity - gay rights, if you will - developed.  A piece in The New Yorker looks at this development.  Here are excerpts:

On August 29, 1867, a forty-two-year-old lawyer named Karl Heinrich Ulrichs went before the Sixth Congress of German Jurists, in Munich, to urge the repeal of laws forbidding sex between men. He faced an audience of more than five hundred distinguished legal figures, and as he walked to the lectern he felt a pang of fear. “There is still time to keep silent,” he later remembered telling himself. “Then there will be an end to all your heart-pounding.” But Ulrichs, who had earlier disclosed his same-sex desires in letters to relatives, did not stop.

[H]e had an effect: a few liberal-minded colleagues accepted his notion of an innate gay identity, and a Bavarian official privately confessed to similar yearnings.

The first chapter of Robert Beachy’s “Gay Berlin: Birthplace of a Modern Identity” (Knopf) begins with an account of Ulrichs’s audacious act. The title of the chapter, “The German Invention of Homosexuality,” telegraphs a principal argument of the book: although same-sex love is as old as love itself, the public discourse around it, and the political movement to win rights for it, arose in Germany in the late nineteenth and early twentieth centuries. This message may surprise those who believe that gay identity came of age in London and New York, sometime between the Oscar Wilde trials and the Stonewall riots. The brutal repression of gay people during the Nazi period largely erased German gay history from international consciousness, and even from German memory.

Ulrichs, essentially the first gay activist, encountered censorship and ended up going into exile, but his ideas very gradually took hold. In 1869, an Austrian littérateur named Karl Maria Kertbeny, who was also opposed to sodomy laws, coined the term “homosexuality.” In the eighteen-eighties, a Berlin police commissioner gave up prosecuting gay bars and instead instituted a policy of bemused tolerance, going so far as to lead tours of a growing demimonde.

In 1896, Der Eigene (“The Self-Owning”), the first gay magazine, began publication. The next year, the physician Magnus Hirschfeld founded the Scientific-Humanitarian Committee, the first gay-rights organization. By the beginning of the twentieth century, a canon of gay literature had emerged (one early advocate used the phrase “Staying silent is death,” nearly a century before aids activists coined the slogan “Silence = Death”); activists were bemoaning negative depictions of homosexuality (Thomas Mann’s “Death in Venice” was one target); there were debates over the ethics of outing; and a schism opened between an inclusive, mainstream faction and a more riotous, anarchistic wing.

Why did all this happen in Germany? . . .  the answers are hardly elusive. The inclination to read German history as an extended prelude to Nazism—the “heading for Hitler” narrative—has tended to exclude countervailing progressive forces, especially those of the Wilhelmine period, from 1871 to 1918. The towering legacy of German idealism and Romanticism, which helps to explain why the gay-rights movement took root in Germany, has itself become somewhat obscure, especially outside the German school system.

Gay urges welled up across Europe during the Romantic era; France, in particular, became a haven, since statutes forbidding sodomy had disappeared from its books during the Revolutionary period, reflecting a distaste for law based on religious belief. The Germans, though, were singularly ready to utter the unspeakable. Schopenhauer took a special interest in the complexities of sexuality; in a commentary added in 1859 to the third edition of “The World as Will and Representation,” he offered a notably mellow view of what he called “pederasty,” saying that it was present in every culture.

The most revelatory chapter of Beachy’s book concerns Leopold von Meerscheidt-Hüllessem, a Berlin police commissioner in the Wilhelmine period, who, perhaps more than any other figure, enabled “gay Berlin” to blossom. Meerscheidt-Hüllessem’s motivations remain unclear. He was of a “scheming nature,” a colleague noted, and liked nothing better than to gather masses of data on the citizenry, like a less malignant J. Edgar Hoover. His Department of Homosexuals, founded in 1885, maintained a carefully annotated catalogue of Berliners who conformed to the type. He evidently was not gay, although his superior, Bernhard von Richthofen, the police department’s president, is said to have had a taste for young soldiers. Meerscheidt-Hüllessem might have reasoned that it was better to domesticate this new movement than to let it become politically radicalized or overtaken by criminal elements.

During the golden years of the Weimar Republic, which occupy the last chapters of “Gay Berlin,” gays and lesbians achieved an almost dizzying degree of visibility in popular culture.  . . . . The openness of Berlin’s gay scene attracted visitors from more benighted lands; Christopher Isherwood lived in the city from 1929 to 1933, enjoying the easy availability of hustlers, who, in Beachy’s book, have a somewhat exhausting chapter to themselves.


Beachy enlarges our understanding of how the international gay-rights movement eventually prospered, despite the catastrophic setbacks that it experienced not only in Nazi Germany but also in mid-century America. Significantly, it was a German immigrant, Henry Gerber, who first brought the fight for gay rights to America, in the nineteen-twenties; Gerber’s short-lived Society for Human Rights, in Chicago, took inspiration from Hirschfeld and perhaps lifted its name from Radszuweit’s group.

The Human Rights Campaign, a powerhouse of contemporary gay politics, which was first formed as a political action committee, in 1980, also echoes the German nomenclature, intentionally or not. Furthermore, Radszuweit’s determination to project a well-behaved, middle-class image anticipated the strategy that has allowed the H.R.C. and other organizations to achieve startling victories in recent years. German homosexuals—especially well-to-do men—began to win acceptance when they demanded equal treatment and otherwise conformed to prevailing mores. In this respect, Germany in the period from 1867 to 1933 bears a striking, perhaps unsettling, resemblance to twenty-first-century America.