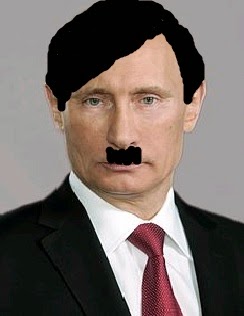 With the midterm elections, the holiday season and most recently the supposed snowpocalypse in the Northeast, the American media, true to form, has lost attention on events in Russia and the dangerous moves of Russian dictator, Vladimir Putin.  For some time now I have noted how many of Putin's moves and claimed justifications for his actions seem modeled on Adolph Hitler's actions in the 1930's - even Hillary Clinton noted some of the parallels back in the spring.  A column in the New York Times looks at Putin's actions and, more importantly what future moves the egomaniac dictator may make in the future.  Here are excerpts:

Last March, former Secretary of State Hillary Clinton was quoted as saying that Russian President Vladimir Putin’s attack on Ukraine, supposedly in defense of Russian-speakers there, was just like “what Hitler did back in the ‘30s“ — using ethnic Germans to justify his invasion of neighboring lands. At the time, I thought such a comparison was over the top. I don’t think so anymore. I’d endorse Mrs. Clinton’s comparison purely for the shock value: It draws attention to the awful things Putin is doing to Ukraine, not to mention his own country, whose credit rating was just reduced to junk status.

Putin’s use of Russian troops wearing uniforms without insignia to invade Ukraine and to covertly buttress Ukrainian rebels bought and paid for by Moscow — all disguised by a web of lies that would have made Nazi propagandist Joseph Goebbels blush and all for the purpose of destroying Ukraine’s reform movement before it can create a democratic model that might appeal to Russians more than Putin’s kleptocracy — is the ugliest geopolitical mugging happening in the world today.

Ukraine matters — more than the war in Iraq against the Islamic State, a.k.a., ISIS. It is still not clear that most of our allies in the war against ISIS share our values. . . . If Putin the Thug gets away with crushing Ukraine’s new democratic experiment and unilaterally redrawing the borders of Europe, every pro-Western country around Russia will be in danger.

“Putin fears a Ukraine that demands to live and wants to live and insists on living on European values — with a robust civil society and freedom of speech and religion [and] with a system of values the Ukrainian people have chosen and laid down their lives for,”

I’d support increasing our military aid to Ukraine’s Army now so it can better defend itself from the estimated 9,000 troops Putin has infiltrated into Ukraine.  Ukraine also needs $15 billion in loans and grants in the next year to stabilize its economy, in addition to its bailout from the International Monetary Fund.

Ukraine could also impact the price of oil. The two biggest actors who can shape that price today are Saudi Arabia’s new king, Salman, and Russia’s czar, Putin. If the Saudis decide to cut back production significantly, the price of oil will go up. And if Putin decides to fully invade Ukraine, or worse, one of the Baltic states, and test whether NATO will really fight to defend either, the price of oil will go up. . . . With his economy in shambles, Putin’s regime is now almost entirely dependent on oil and gas exports, so he’s really hurting with the oil price collapse.

Posted by Michael-in-Norfolk at Wednesday, January 28, 2015