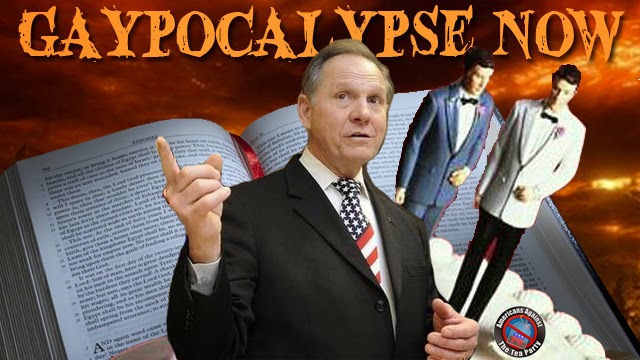 When I lived in Alabama and had an opportunity to meet then Governor George Wallace, Wallace had had the decency to admit the error of his past, segregationist ways.  Indeed, compared to today's Republicans in Alabama, Wallace would be a moderate and were he alive and running for office, he'd have to run again as a Democrat.  If you don't believe me. look no farther than batshit crazy Republican Chief Justice Roy Moore who was previously removed from office only to be later reelected by the Christofascist/Tea Party factions.  Now, Moore has stated that he will not submit to the federal court ruling striking down  Alabama's same sex marriage ban.  The result?  The Southern Poverty Law Center has filed an ethics complaint seeking Moore's removal from the Alabama Supreme Court.  The New Civil Rights Movement has details.  Here are highlights:

After two federal rulings supporting the freedom to marry for Alabama same-sex couples, state Supreme Court Chief Justice Roy Moore warned he would not succumb to "tyranny!" from the federal government. In a three-page fire-and-brimstone letter sent to sent Republican Governor Robert Bentley, Moore warned "the destruction of that institution is upon us by federal courts using specious pretexts based on the Equal Protection, Due Process and Full Faith and Credit Clauses of the United States Constitution."

Now, the Southern Poverty Law Center is getting involved. The decades-old civil rights group best known for reducing the size and power of the KKK and more recently for expanding the scope of its hate group definition to include anti-gay groups, among others, the SPLC has filed an ethics complaint today against Moore with the Judicial Inquiry Commission of Alabama – the same Commission that once before removed Moore from his job.

“Moore is once again wrapping himself in the Bible and thumbing his nose at the federal courts and federal law,” SPLC President Richard Cohen said in a statement. “As a private citizen, Moore is entitled to his views. But as the chief justice of Alabama, he has a responsibility to recognize the supremacy of federal law and to conform his conduct to the canons of judicial ethics.”

The SPLC says its complaint "describes how Moore has committed numerous ethics violations, noting that he is encouraging lawlessness by attempting to assemble a virtual army of state officials and judges to oppose the federal judiciary and its 'tyranny' – the opposite of what is expected from the state’s chief judge."

Moore was removed a decade ago from his job as Chief Justice after refusing to remove a stone monument of the Ten Commandments from the state courthouse.

Last year, Moore told an audience in Washington state that the intent of same-sex marriage is to destroy America. Moore also made headlines last year when he traveled to Mississippi, attacked same-sex marriage, and claimed the First Amendment applies only to Christians.


Moore needs to be removed from the Court and preferably sent to a mental institution!
Posted by Michael-in-Norfolk at Wednesday, January 28, 2015

I agree completely. Moore should be removed, and he should have been barred from holding a Judical,office again when he was removed the first time. He has no regard for the law or the safety of Alabamians.