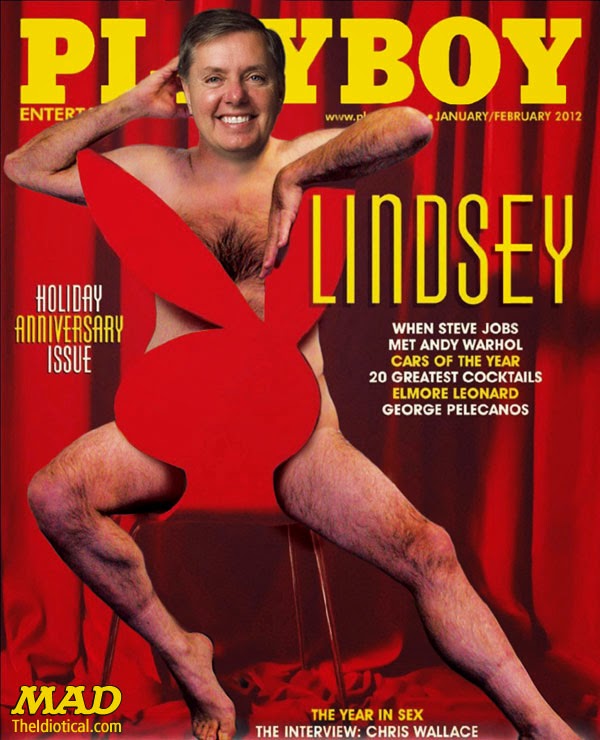 There are times I truly wonder what mind altering drug is being blended into the water that today's Republicans are drinking.  They seem utterly untethered from objective reality and, while professing a worship of "Christian values," they push an agenda that is the antithesis of the Gospel message.  The latest example id Lindsey Graham, a closeted gay Republican know by some as the "Palmetto Queen," who is insanely talking about running for the 20016 GOP presidential nomination.  The man is either totally insane, on drugs or trying to gain media attention.  Politico looks at Graham's bizarre belief that he's presidential candidate material.  Here are highlights:

Blunt-spoken Lindsey Graham is a vocal supporter of the Iraq War, a deal-cutter on immigration and a backer of President Barack Obama’s Supreme Court nominees.  And that’s the profile the Republican Party needs in its next presidential nominee, he says.

“My party is center right,” Graham told reporters in the Capitol on Thursday. “There’s an element of the left and the right that I don’t think reflects both parties.”

He added: “For those people who believe we are not hard-ass enough on immigration — that we are losing the Hispanic vote because they think we’ve gone soft on immigration — really don’t understand what’s going on in America. A center-right candidacy can prevail in America.”

Graham, 59, who won a third Senate term in November, made his comments Thursday after announcing the formation of an exploratory committee, called “Security through Strength,” to test the waters for a potential 2016 presidential bid.

Graham is viewed as a long shot to win the GOP nomination. But with the most wide-open presidential field in years — as many as two dozen potential candidates are exploring bids — Graham believes there’s an opening for his blend of conservatism. Specifically, Graham thinks he can bill himself as a bipartisan problem-solver who can appeal to Hispanic voters.

[John} McCain, who has been talking up Graham’s presidential prospects for weeks, said he would “absolutely” consider transferring his entire 2008 presidential campaign infrastructure to a potential Graham run. If Graham runs, McCain said, he would immediately endorse him.

“He’s the dark horse. And you watch him. He’ll be a lot more formidable than anyone thinks at this moment,” McCain said. “There are many supporters of mine who are more than happy to examine his campaign.”