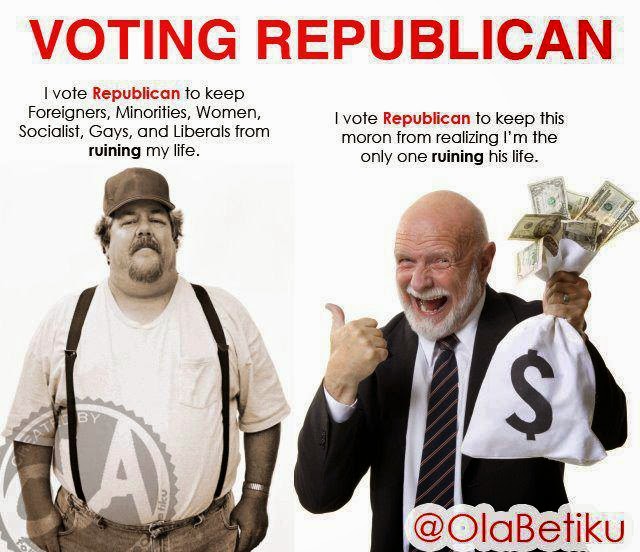 The GOP policies of aiding the wealthy, blocking funding for infrastructure repairs, and the destruction of labor unions continue to bear fruit and the American middle class continues to shrink.  It's all in keeping with the GOP's apparent desire to bring back the worse aspects of the Gilded Age when the wealthy lived like aristocrats and the rest of us were the peasants and serfs.  The shortsightedness, of course, is that as the middle class shrinks, the purchasing power that drives the overall economy shrinks.  Not that Republicans seem to care given all of the political bribes contributions they receive from wealthy and vulture capitalists.  The New York Times looks at the alarming trend.  Here are highlights:

The middle class that President Obama identified in his State of the Union speech last week as the foundation of the American economy has been shrinking for almost half a century.

Few people noticed or cared as the size of that group began to fall, because the shift was primarily caused by more Americans climbing the economic ladder into upper-income brackets.

But since 2000, the middle-class share of households has continued to narrow, the main reason being that more people have fallen to the bottom.


The definition here starts at $35,000 — which is about 50 percent higher than the official poverty level for a family of four — and ends at the six-figure mark. Although many Americans in households making more than $100,000 consider themselves middle class, particularly those living in expensive regions like the Northeast and Pacific Coast, they have substantially more money than most people.

However the lines are drawn, it is clear that millions are struggling to hang on to accouterments that most experts consider essential to a middle-class life.

“I would consider middle class to be people who can live comfortably on what they earn, can pay their bills, can set aside something to save for retirement and for kids in college and can have vacations and entertainment,” said Christine L. Owens, executive director of the National Employment Law Project . . .


Even as the American middle class has shrunk, it has gone through a transformation. The 53 million households that remain in the middle class — about 43 percent of all households — look considerably different from their middle-class predecessors of a previous generation, according to a New York Times analysis of census data.

In recent years, the fastest-growing component of the new middle class has been households headed by people 65 and older. Today’s seniors have better retirement benefits than previous generations. Also, older Americans are increasingly working past traditional retirement age. More than eight million, or 19 percent, were in the labor force in 2013, nearly twice as many as in 2000.

The growing prominence of older people in the middle class reflects, in part, the way Social Security and Medicare — originally set up as safety nets to protect seniors from falling into poverty after retirement — have provided a substantial cushion for them against hard times.

Married couples with children — who make up a category that is shrinking over all — are diminishing even faster as a share of the middle class. In the late 1960s, about 45 percent of all households included married adults and their offspring. But among middle-class households, more than 60 percent had that traditional family arrangement.

Today, married couples with children at home make up just a quarter of households.


The most recent recession put a halt to the advances of even that generally successful group. Its share in the middle class has fallen by three percentage points and the share earning less than $35,000 has increased.

“In the Great Recession, we lost a lot of middle-income jobs and we gained a lot of low-paying jobs,” said Michael R. Strain, resident scholar at the right-of-center American Enterprise Institute.

According to a New York Times poll in December, 60 percent of people who call themselves middle class think that if they work hard they will get rich. But the evidence suggests that goal is increasingly out of reach. When middle class people look up, they see the rich getting richer while they spin their wheels.

“The middle has basically stayed the same; it hasn’t improved,” said Lawrence F. Katz, an economist at Harvard University.

What is the most frustrating to me is how the GOP continues to use religion and racism to sucker idiot voters to vote for Republicans even as the GOP pushes policies that will harm those very same voters.  Thus, if one wants upward social mobility, nowadays, one needs to move to Europe.
Posted by Michael-in-Norfolk at Monday, January 26, 2015