How the Kock Brothers Want to Buy the GOP Presidential Nomination 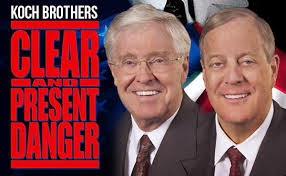 There seem to be few limits to the greed and hunger for power of the Koch brothers whose companies are among the worse polluters in America and who do much to further the effort to return America to a new Gilded Age with themselves, of course, enjoying the lifestyle of the robber barons of old.  Now, some see the Koch brothers planning a campaign if you will to buy the GOP presidential nomination for whoever will be most craven to the Koch brother's foul, anti-democratic agenda.  A piece in Slate looks at the Kochs machinations.  Here are highlights:

The rise of the super PAC in the 2012 presidential election seemed like the pinnacle of Big Money politics—an unprecedented expansion of fundraising and donor influence.

But that was then. For 2016, the pioneers of that kind of politics—conservative billionaires Charles G. and David H. Koch—have found a new summit. According to the New York Times, the siblings plan to spend close to $900 million on next year’s campaign, with incursions into the Republican presidential primary. At more than double the roughly $400 million the Koch brothers spent in 2012, this money would go to polling, analytics, advertising, grassroots campaigns, single-issue advocacy groups, and more.

[I]t involves roughly 300 other donors and “includes groups like Freedom Partners, a trade organization overseen by Koch advisers that plans the retreat and helps corral contributions; Americans for Prosperity, a national grassroots group; and Concerned Veterans for America, which organizes conservative veterans.” Another way to put this is that the organization is something of a joint effort on behalf of the kinds of people who already participate in Republican politics.

Specifically, they make themselves a powerful force in the fight to pick a presidential nominee. . . .  Cross the Koch brothers—on climate change or economic regulations or any of their other pet issues—and you risk losing an important source for help and money.

[T]he huge presence of David and Charles Koch changes that calculation. They give Walker better ground to stand on. He can run an insurgent campaign, and unlike Mike Huckabee in the 2008 race, he won’t run out of cash. Suddenly, there’s a real alternative to the original consensus candidate, and the two are forced into serious competition, which can reveal hidden strength or highlight unnoticed weakness. And if Walker loses the nomination, then at least the Kochs have made themselves an even stronger force in Republican politics—a fourth leg to the GOP coalition.

[T]his is still a fascinating development in American politics, if not an entirely unprecedented one. In the industrializing America of the late 19th century, business leaders spent huge sums to keep politicians from regulating industry and taming their activities. If this marriage of extreme wealth and mass politics was the norm for the first Gilded Age, then there’s no reason it should be different for the second one.

Posted by Michael-in-Norfolk at Wednesday, January 28, 2015