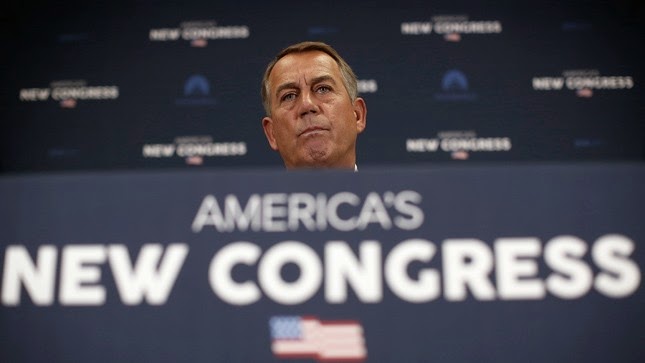 So far the Republican promise to prove that a GOP controlled Congress can govern responsibly has  fallen flat with Congressional Republicans continuing to push the agenda of the lunatic elements of the GOP base while ignoring the issues that a majority of Americans want fixed.  While it is frustrating to see nothing being accomplished, some believe all of the batshitery and obstruction plays to Hillary Clinton's advantage in 2016, especially of the GOP do nothing serious and necessary approach continues.  The GOP's biggest issue is that the party base doesn't live in a world of objective reality and, therefore, catering to the base's wants only leads to insanity. A column in The Hill looks at why the GOP may be helping Hillary.  Here are excerpts:

While Republicans bask in the glory of their victories in 2014 and continue their hyperpartisan onslaught in the new Congress, some early numbers should keep GOP strategists awake at night.

According to a recent ABC/Washington Post poll, Hillary Clinton would defeat Jeb Bush in 2016 by 13 percentage points. She would defeat Chris Christie by 13 points, Rand Paul by 13 and Mitt Romney by 15.

According to the summary of polling from Real Clear Politics, approval of the Republican Congress is barely 15 percent. Disapproval remains near 72 percent. Control of Congress means ownership of the vast unpopularity of Congress.

Meanwhile, President Obama’s popularity has risen significantly since November. The stage is set for Clinton to begin a 2016 campaign with a significant lead over GOP opponents and run against a highly unpopular Republican Congress.

There is a GOP distemper in Washington, an overreaching of aggressive tactics against Democrats and an underachievement of success in governing. The result? Obama rises in favorability, Clinton rises against Republicans.

The most egregious GOP overreach was the decision by Speaker John Boehner (R-Ohio) to invite Israeli Prime Minister Benjamin Netanyahu, a bitterly divisive figure in Israel and the U.S., to address a joint session of Congress . . . Breaking with precedent, tradition and protocol, Boehner did not consult with House Minority Leader Nancy Pelosi (D-Calif.), with Democratic or Republican leaders in the Senate or with the White House before inviting a foreign leader to use the platform of Congress itself to campaign for his reelection and condemn American policy on vital matters of security.

These GOP overreaches create a golden opportunity for Clinton to be elected president and for Democrats to regain control of Congress.

The smart move for Clinton might be to wait until June to formally launch her candidacy. She could spend spring quietly building her campaign structure and creating a legal entity to begin major fundraising, giving thoughtful and uplifting speeches in dignified settings offering her vision for the future, while the crowd of candidates in an overreaching and underachieving GOP begin clawing at one another’s eyeballs.