When the GOP Went insane: 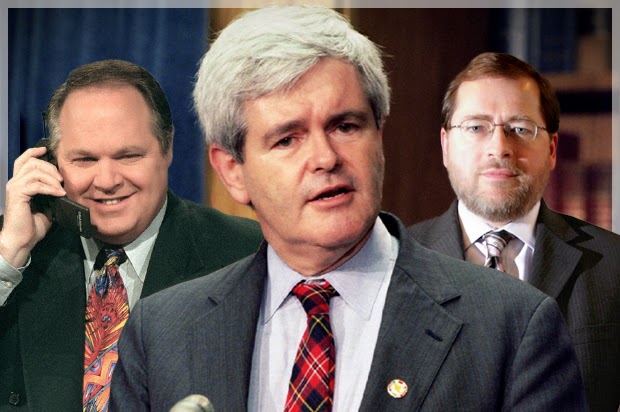 As I have often noted, I was once a Republican activist and served on a local city committee for the GOP before the GOP went insane - which large equates with when the Christofascists infiltrated and took over the party grass roots and threw moderation, compromise and basic sanity out the window.   A piece in Salon argues that the mid-1990's is the crucial time period when the drift to insanity became irreversible.  The timing largely coincides with what I witnessed, although in Virginia Beach, it took the Christofascist and their political prostitutes a bit longer to hijack the party in that city.  In other regions of Virginia, the takeover occurred even earlier.  Here are article highlights which, in my view, under plays the role of the Christofascists:

The Republican sweep of 1994 gave Movement Conservatives a free hand to set the terms of political debate, although reporters noted that they seemed to articulate only what they opposed, not what they favored. What they opposed was very clear: they hated what they claimed was the socialist system that was turning America into a nation of dependents. Destroying it, they thought, was simple: just get rid of the taxes that paid for it.

Rush Limbaugh, whose support had been so instrumental that the Republican revolutionaries of 1994 made him an honorary member of their incoming congressional freshman class, outlined their agenda. They must “begin an emergency dismantling of the welfare system, which is shredding the social fabric,” bankrupting the country, and “gutting the work ethic, educational performance, and moral discipline of the poor.” Next, Congress should cut capital gains taxes, which would drive economic growth, create hundreds of thousands of jobs, and generate billions in federal revenue. Limbaugh kept staff in Washington to make sure the positions of the Movement Conservatives got through to voters. In exchange, every congressman knew that taking a stand against Limbaugh would earn instant condemnation on radio stations across the country.

The Gingrich revolutionaries hit the ground running. They took over control of key positions in the House—Gingrich became Speaker; Armey, House majority leader; Texas’s Tom DeLay, majority whip. In April 1995, an internal memo laid down the theme of cutting taxes, rather than paying down the national debt, as the main principle of Republicanism.
In the end, the inability of Gingrich’s revolutionaries to compromise meant they went too far. Pieces of the agenda triumphantly passed in the House were watered down in the Senate and fell to the president’s veto. Frustrated when Clinton refused to sign the Republican budget slashing funding for Medicare, public health, the environment, and education, Gingrich refused to compromise. The federal government shut down all nonessential activity for twenty-eight days between November 1995 and January 1996 . . . The crisis pushed Clinton’s poll numbers higher than they had been since his election as American blamed Republicans for the shutdown.

Disaffected Americans began to see plots everywhere: politicians were selling out America to socialism. It was imperative for regular citizens to take matters into their own hands, just as the boys in Red Dawn had done, and return the nation to the traditional values Buckley had asserted in the 1950s: religion, the free market, and a strong military.

Antigovernment extremism forced its way into American consciousness on the morning of April 19, 1995, when a bomb exploded in front of the Alfred P. Murrah Federal Building in downtown Oklahoma City.

In October 1996, the movement gained its own television network, with Roger Ailes as its founding CEO. The Fox News Channel (FNC) was the brainchild of Australian-born media mogul Rupert Murdoch, who recognized the frustration of Movement Conservatives with what they insisted was a Liberal media biased against their version of the world. . . . . presented a mythologized America based on the ideology of Movement Conservatism. Its Americans were overwhelmingly white and rural and wanted just to be independent individuals. They hated taxes and intrusive government, and they would do fine if they could just get the socialistic Democrats to leave them alone.

Movement Conservatism had always been based in ideology, not reality. As far as Movement Conservatives were concerned, Clinton was a mistaken president, an abomination, and they had finally been able to prove it.

They swung toward conspiracy theories and pure Clinton-bashing, aided by talk radio and by new websites, especially the Drudge Report. In 1997, Matt Drudge and his assistant, Andrew Breitbart—who was a fan of Limbaugh—began aggregating anti-Democratic gossip and news. They sensationalized rumor and began to build a community of likeminded right-wing radicals on the increasingly powerful Internet.

Posted by Michael-in-Norfolk at Saturday, September 20, 2014