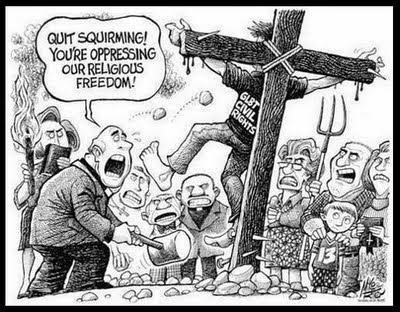 While gays can be fired at will in 29 states, in 31 states same sex marriage is still illegal or in limbo under stays of court rulings, and Christianity continues to receive undeserved deference right and left, according to the Christofascists - especially those who make a living disseminating hatred and untruths - it is nonetheless the "believing Christians" who are the ones facing daily persecution.  As I've said repeatedly, when it comes to the professional Christian set, the safest assumption is that if their lips are moving, they are lying.  In their world, there are seemingly only nine Commandments.  A piece in Edgeonthenet looks at the lies that continue as the Christofascist strive to whip up homophobia and, just as importantly, keep the flow of money coming in.  Here are excerpts:

Since the dawn of recorded time, aggressors have shared one common trait: They believe - or would have others believe - that they are the aggrieved party.

The latest iteration of this guiding principle has consumed the airwaves, ether and pulpits among the Christian right: Practicing Christians have declared themselves a persecuted minority. These activists and commentators fail to add that we remain very much a nation far more devout than Western Europe and much of the rest of Christendom.

The Nazis, who were masters at this, found a convenient scapegoat in "the Jews," who were blamed for everything from Germany's loss in World War I to inflation, rampant communism, rampant capitalism and bad crop yields. For today's Christian right, the blame falls squarely on the gays, widely known to them as "homofascists." Among those leading the charge is Scott Lively, whose "scholarly work" got the ball rolling back in 1995 with his book The Pink Swastika, a work of historical revisionism that argued homosexuals were not only not persecuted by the Nazis, but remained the bulwark of its power base through the entire Third Reich.

Somewhere along the way, gay men morphed from limp-wristed, dyed-miniature-poodle-walking hairdressers into muscle-bound, jack-booted thugs, the Storm Troopers of the progressive elite.   Lesbians in the collective Christian consciousness didn't have nearly as far to go to fit the gross stereotype. Those who are transgender are still too busy invading restrooms to man the barricades.

Lively is typical of the way hard right-wing Christian activists have made a name for themselves - and a tidy income - by continually evoking the Homosexual Agenda, which, in its mystery, reach and power, apparently makes the Elders of Zion (a conspiracy of Jews invented by the czarist secret police) look like amateurs.

Indeed, there's a whole industry based on this meme. I call it, with apologies to Eisenhower's military-industrial complex, the homophobia-Christianity complex.

Their list of grievances is long, but they boil down to four categories:
• Marginalizing those opposed to "the escalating gay tyranny" via the media, entertainment, sports figures and anyone else who happens to be around.
• Making the good bad, the bad good, until the good succumbs to the bad, as happened with the Boy Scouts and the Armed Forces.
• Silencing brave martyrs to the cause, such as the patriarch of cable reality show Duck Dynasty and Brandon Eich, the short-lived CEO of Mozilla.
• Turning the law on its head, such as the ongoing claim that antidiscrimination statutes mandate Christians turn their backs on their faith to stay in business and pervert the privacy of public restrooms.

Although it's easy - OK, really easy - to dismiss these self-styled activists as crackpots, they retain a powerful hold on a significant number of Americans. Powerful fellow travelers in the media like Fox News, where the "war on Christmas" is as regular an annual event as the Rockefeller Center tree-lighting ceremony, have given them a nationwide platform. And politicians are listening.

How do we combat this evil agenda?  A first step is coming out of the closet to family, friends and neighbors.  Nothing destroys the stereotypes the Christofascists seek to uphold more than having people know who you are and that, in fact, you are not any different than they are.  A second step is to get involved politically and socially and challenge these hate merchants.  Yet a third step is to get out and vote against politicians who happily prostitute themselves to the Christofascists.