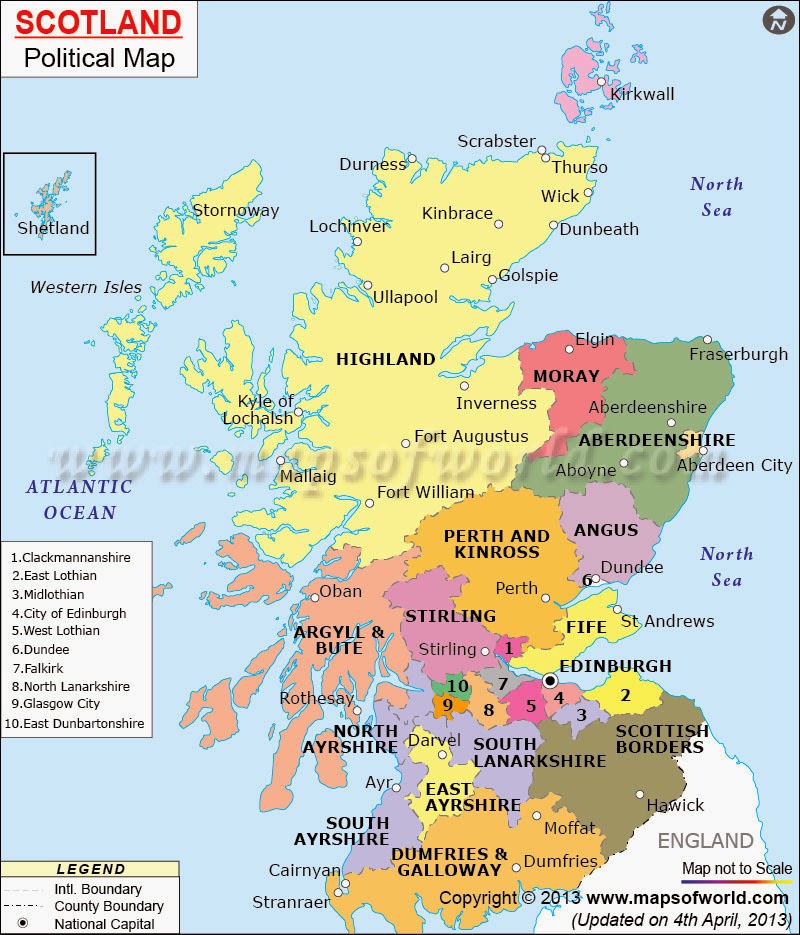 In a historic vote that had many wringing their hands in fear, Scotland has voted against independence from Great Britain.  Now, with the "No" vote having prevailed, many expect Britain to make moves that will lead to more Scottish autonomy within the larger nation - a more federalized system, if you will.  Like the perennial separatists in Quebec, I am sure that those on the losing side will continue to roil the political waters.  Here are highlights from the New York Times:

Voters in Scotland decisively rejected independence from the United Kingdom in a referendum that had threatened to break up the 307-year union, but also appeared to open the way for a looser, more federal Britain.


With results tallied from all 32 voting districts, the “no” campaign won 55.3 percent of the vote while the pro-independence side won 44.7 percent. The margin was greater than forecast by virtually all pre-election polls.

The outcome was a deep disappointment for the vocal, enthusiastic pro-independence movement led by the Scottish first minister, Alex Salmond, who had seen an opportunity to make a centuries-old nationalist dream a reality and forced the three main British parties into panicked promises that they would grant substantial new power to the Scottish Parliament.

The decision spared Prime Minister David Cameron of Britain a shattering defeat that would have raised questions about his ability to continue in office and would have diminished his nation’s standing in the world.

Mr. Salmond, while conceding defeat, insisted that the 1.6 million people who voted for independence showed the depth of yearning for the promises made by British political leaders to stave off disunion.

“Scotland will expect these to be honored in rapid course,” Mr. Salmond said, while promising to work to heal the divisions the referendum created.

The vote preserved a union molded in 1707, but it left Mr. Cameron facing an angry backlash among some lawmakers in his Conservative Party, angered by the promises of greater Scottish autonomy that he and other party leaders made just days before the vote, when it appeared that the independence campaign might win. Some lawmakers called for similar autonomy for England itself, and even the creation of a separate English parliament.

The outcome headed off the huge economic, political and military imponderables that would have flowed from a vote for independence. But it also presaged a looser, more federal United Kingdom. And it was unlikely to deter Scottish nationalists from trying again, in the future, to attain independence.

President Obama had made little secret of his desire that the United Kingdom remain intact. Indeed, Britain has long prided itself on a so-called special relationship with the United States, and Britain’s allies had been concerned, among other things, about Mr. Salmond’s vow to evict British nuclear submarine bases from Scotland, threatening London’s role in Western defenses.

Posted by Michael-in-Norfolk at Friday, September 19, 2014