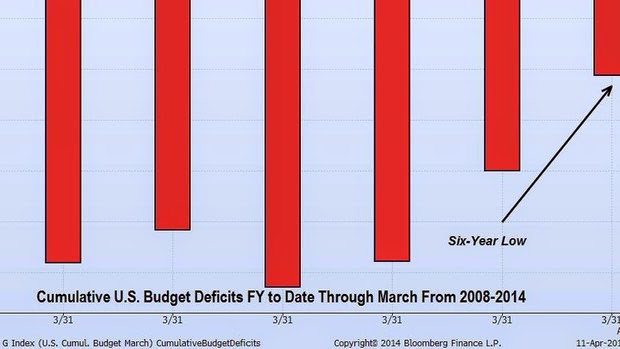 Remember the GOP forced government shut down which was supposedly motivated by GOP concerns over out of control spending by Barack Obama?  Remember seeing anti-Obama bumper stickers proclaiming "Stop the Spending" - I saw one just this morning on a car with tea Party license plates?  Like so much of what the GOP says, the truth is that contrary to GOP sound bites, the budget deficit is dropping rapidly - or at least it is until the GOP drags the country into another fool's errand Middle East war.  This fact, of course means little to the GOP party base which remains incensed that a black man occupies the White House.  Forbes looks at the real truth about the nation's budget deficit and provides news one will never see on Fox News, a/k/a Faux News, or hear from the lips of GOP demagogues.  Here are highlights:

The U.S. Treasury announced last Thursday that the federal deficit was $128.7 billion in August. That’s 13 percent lower than it was during the same month last year.

Washington typically records a budget surplus in September and $80 billion or so in black ink is in fact projected for next month. If that occurs as expected, the deficit for all of 2014 will be about $500 billion. That will be more than 26 percent below 2013 and the smallest federal deficit by far since 2008.

[T]he Treasury’s report should have provided an excuse for all of the participants in the budget debate to say something about the numbers. . . . . Instead there was nothing.

In other words, the federal deficit has almost completely disappeared as an issue.

Some of the reason for this incredible disappearing act is that a rapidly declining deficit just isn’t as valuable inside the beltway as one that is quickly rising.

That’s one reason why the recent political focus has been shifting from the deficit, which has been dramatically declining, to the national debt, which even with a smaller deficit is still increasing.

But the bigger reason is that most everyone involved in the federal budget debate likely has concluded that it’s not in his or her interest to talk about the deficit before the election.

The GOP doesn’t want to remind people about the budget, which was the reason for its lowest approval rating of the past few years. The tea party doesn’t want to be asked about why it isn’t shutting down the government again.

And the deficit groups, which exist largely to reduce the deficit, have a much tougher time justifying their existence when it’s falling.

Put this all together and you get a federal deficit that has all but disappeared from view, at least until the election is over.

In the meantime, the deficit will continue to be in the political equivalent of a witness protection program.

The GOP hates a declining deficit because it makes demand spending cuts in exchange for tax increases far harder to see - even with the cretins in the GOP base.   It also takes away a major distraction from the reverse Robin Hood policies of the GOP which seek to give to the wealthy at the expense of the middle and lower classes.