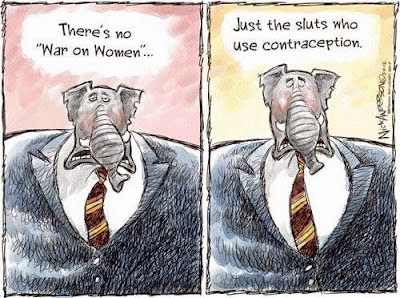 Even after a GOP internal study concluded that the Republican Party confirmed that women find the GOP to be largely radioactive and favor Democrats by a large margin, Senate Republicans blocked the Equal Pay Bill which would have banned salary secrecy and tighten rules to try to narrow the gender wage gap.  Sadly, this move is part and parcel with the GOP's view that women are inferior and not worthy of equal pay for equal work.  It's basically an extension of the GOP view that when not participating in a Republican women group, women should basically be at home barefoot and pregnant.  One can only hope that women will pay attention and cast their vote against the GOP come November.  A piece in Think Progress looks at this latest "flipping the bird" to women.  Here are excerpts:

After allowing the Paycheck Fairness Act to move forward last week, Senate Republicans turned around on Monday evening and unanimously voted to block the bill, which would ban salary secrecy and tighten rules to try to narrow the gender wage gap.

The vote came weeks after the Republican National Committee claimed that “All Republicans support equal pay.” Senate Republicans have unanimously shot the bill down multiple times over the past four years.

The bill includes a number of provisions aimed at preventing the gender wage gap in the first place, which currently means a woman who works full time, year round makes 77 percent of what a similar man makes and hasn’t budged in a decade.

It would ban salary secrecy, in which employers prohibit or strongly discourage employees from discussing pay with each other, thus making it difficult for women to discover unequal practices.

While it’s illegal to tell workers they can’t talk about wages with each other without a business justification, since it infringes on the right to engage in concerted activities for mutual aid, it’s still widespread: about half of private sector workers say they can’t talk about pay at work.

The Paycheck Fairness Act would also narrow the definitions of what is considered a legitimate business-related justification for pay disparities between a man and a woman with the same skills, responsibilities, and working conditions, while increasing penalties for those who are found to have no reason for gaps. It’s meant to discourage unequal pay scales so that women don’t have to remedy situations by bringing lawsuits, which are time consuming, costly, and increasingly difficult to win.

Republicans say they are in favor of equal pay for women’s work, but they haven’t articulated their alternatives to the Democrats’ bill. Instead they say women are already protected and argue that the gap isn’t as big as the statistics say.

Posted by Michael-in-Norfolk at Monday, September 15, 2014