The NFL's Wink and a Nod to Domestic Violence 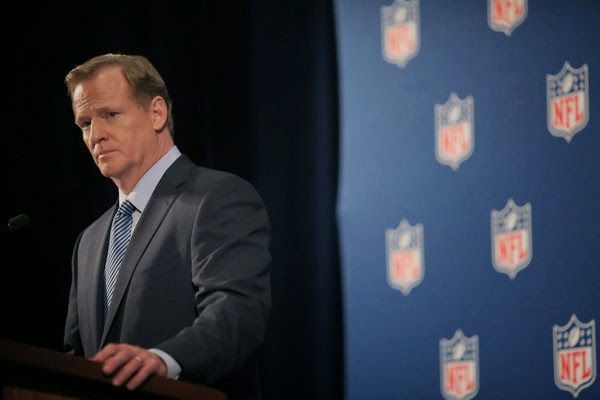 I'm no fan of the NFL for any number of reasons, not the least of which is the homophobia that remains rampant throughout the league and its owners, coaches and players.  Yet another reason to view the NFL is its continued willingness to overlook bad behavior by players, especially when it comes to domestic and sexual violence.  Rather than worrying about Michael Sam's sexual orientation, the NFL needs to be purging its player ranks of thugs and criminals.  Perhaps recent bad publicity will finally force a much needed housecleaning. A piece in the New York Times looks at the NFL's sad record when it comes to players involved in domestic violence.  Here are highlights:

On April 10, 2007, after more than 50 National Football League players had been arrested in the previous football season, Commissioner Roger Goodell was widely hailed for instituting a newly stringent personal conduct policy. Mr. Goodell threatened to banish players for off-the-field transgressions and installed himself as the judge and jury presiding over every case.

Mr. Goodell insisted that he would mete out discipline without waiting for the judicial system.
“It is my job — not law enforcement’s job — to protect the National Football League,” he said at the time.

But in his role as the N.F.L.’s hard-bitten sheriff, Mr. Goodell appears to have had a major blind spot: domestic violence cases. Players charged with domestic violence routinely received considerably lighter punishments than players accused of other offenses, like drug use or drunken driving. Often, they were not punished at all. On Friday, seven years after he implemented the personal conduct policy, Mr. Goodell acknowledged publicly that it had failed and would be overhauled.

An examination of dozens of arrests of N.F.L. players since Mr. Goodell established his personal conduct policy in 2007 — and the fines and penalties doled out by the league — shows that suspensions of two to four games, and sometimes more, were far more likely for players arrested on drunken driving, marijuana possession or weapon charges. A vast majority of players charged with domestic violence crimes, if they were disciplined by the league at all, received one-game suspensions even after pleading guilty to lesser related charges or entering pretrial intervention programs.
The disparity in punishments within the league is illustrated in numerous cases.


“I don’t think the N.F.L. did anything more than give lip service to the notion that they were taking domestic abuse seriously,” said Ann DeLaney, an advocate for victims of domestic violence and the former executive director of the Julian Center in Indianapolis, a victim support group.  Referring to the Ray Rice case, Ms. DeLaney continued, “That’s what they did this time until it was caught on video.”

[T]he recent high-profile episodes have led to a firestorm of protest from inside and outside football.  Tyrone Thomas, a Washington lawyer who advises on sports cases, said the N.F.L. had always had the power to take a tougher tack in instances in which there were accusations of domestic violence, but had chosen not to.

Besides the Rice case, the N.F.L. has also been harshly criticized for its handling of three other recent abuse cases — those of Adrian Peterson, a star running back for the Minnesota Vikings, who has been accused of injuring one of his children; Carolina Panthers defensive end Greg Hardy, who was convicted of assaulting his girlfriend; and San Francisco 49ers defensive end Ray McDonald, who was arrested last month on suspicion of domestic violence.

Nita Chaudhary, a founder of UltraViolet, a women’s rights advocacy group, remained critical of the N.F.L. on Friday despite Goodell’s pledge to revamp the league’s personal conduct policy and penalties. . . . . . We call on all of the N.F.L.’s sponsors to take a stand against domestic violence by withdrawing their support for the N.F.L. until Goodell is out of office.”

The root of the problem?  Likely the macho mindset that thinks being homophobic is fine also sees beating you wife/girlfriend as being fine too.
Posted by Michael-in-Norfolk at Saturday, September 20, 2014