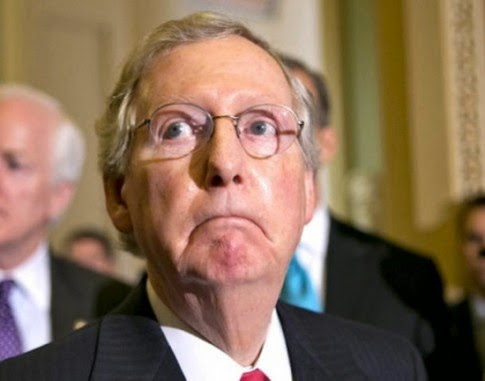 The ever despicable Mitch McConnell, facing a possible defeat in November, has reversed course and is now refusing to debate his Democratic challenger, Alison Lundergan Grimes.   God forbid that McConnell have to answer unrehearsed questions - such as why he wants to throw thousands of his state's residence off of health insurance - or respond to Grimes' challenges. Few things would be sweeter than seeing McConnell defeated come November.  Politicususa looks at McConnell's disingenuous decision to back out of his agreed debate.  Here are highlights:

After appearing to agree to a debate with his Democratic challenger Alison Lundergan Grimes in late October, Sen. Mitch McConnell abruptly flip-flopped and refused to debate the fiery Democrat.

According to WHAS11, McConnell turned down the debate because he would be on a bus tour of KENTUCKY during the potential dates,

McConnell’s biggest issue with the format seemed to be that Grimes was going to be there, and he was going to have to answer questions. Mitch McConnell objected to a live audience being present, and the moderator being allowed to ask questions. Sen. McConnell’s excuses are getting more flimsy with each passing day. There is only one current debate scheduled on October 13.

The only conclusion that can be drawn from McConnell’s behavior is that he is afraid to debate Alison Lundergan Grimes. Mitch McConnell is trying to hide and ride out the storm. His strategy is to win reelection with an onslaught of negative ads against Grimes. McConnell doesn’t believe that voters in all parts of Kentucky deserve to see the candidates live together.

The Grimes campaign had this to say about Yellow Mitch’s duck and run act, “Mitch McConnell had to invent a phantom bus tour to hide from the fact that he has done next to nothing to help create jobs in 30 years, while we’ve lost thousands of good-paying jobs. Rather than accept multiple opportunities for Kentuckians to hear two very different visions for the future, McConnell is strangely comfortable hiding behind the dark money millionaires and billionaires trying to buy his way back to Washington.”


If Mitch McConnell has his way, he will speak more to the Koch brothers this year than to Kentucky voters.   Sen. McConnell is running scared.


Pray that this foul man is defeated.  Kentucky readers need to get out and vote for Grimes and encourage family members and friends to do likewise.
Posted by Michael-in-Norfolk at Thursday, September 18, 2014