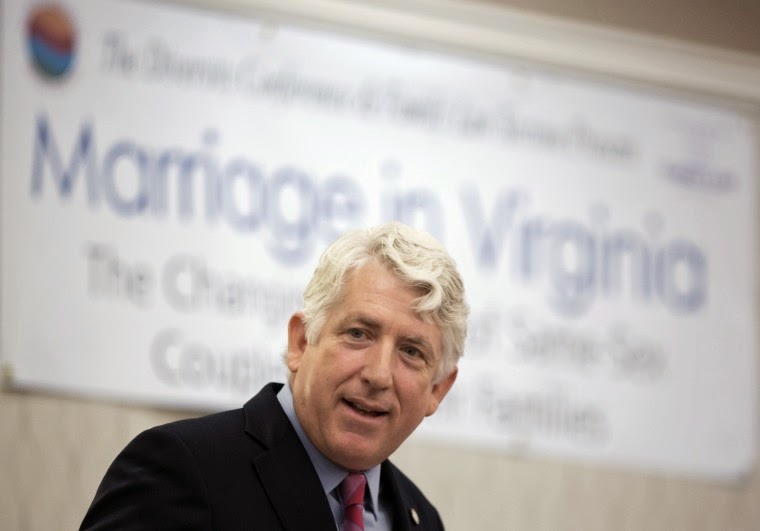 Proving yet again that the Republican Party of Virginia is little more than a band of political prostitutes that always seek to do the biding of the hate merchants at The Family Foundation - and that the Virginia GOP cares nothing about the Virginia Constitution or Code of Virginia - the House of Delegates in a partisan vote authorized Whore-in-Chief House Speaker William J. Howell to hire outside legal counsel to replace Attorney General Mark Herring in the same-sex marriage lawsuit now on appeal to the United States Supreme Court.  It's yet another example of the Virginia GOP seeking to waste taxpayer funds on a cause not supported by a majority of Virginians.  The Richmond Times Dispatch has details:


The House of Delegates voted 65-32 on Thursday to approve a resolution that empowers the speaker of the House to hire outside legal counsel to replace Attorney General Mark R. Herring in the same-sex marriage lawsuit filed against the state but supported by the Attorney General’s Office.

The resolution also empowers the speaker to hire outside counsel if Gov. Terry McAuliffe were to try to expand the state’s Medicaid program without legislative approval or in any other case in which the governor or attorney general declined to defend a state law.


The resolution states the position of the House and does not require Senate or gubernatorial approval. ﻿

Michael Kelly, a spokesman for the attorney general, said in a statement:

“The House should focus on the reason it is here, which is to find a way to extend health care coverage to low-income Virginians, not to waste taxpayers’ money and time on a meaningless resolution that flies in the face of our constitution’s separation of powers.”

Herring had announced in January that he found Virginia’s amendment to the state constitution defining marriage as between a man and a woman to be in violation of the U.S. Constitution. He refused to defend the law in a federal suit seeking to overturn the same-sex marriage ban.

A federal court in Norfolk has since thrown out the state ban. The ruling was affirmed by a panel of federal appeals court judges in Richmond in June. The case is now headed to the U.S. Supreme Court.

Today's Republican Party of Virginia is just a reworked version of those who fought to maintain Virginia's ban on interracial marriage.  Bigotry is the main pillar of the party.
Posted by Michael-in-Norfolk at Friday, September 19, 2014