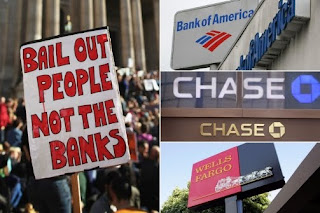 I have voiced my frustration and anger with the big banks and their mortgage lending arms many times on this blog. Rather than work out loan restructures to keep homeowners in their homes - and prevent the continued depression of home prices - the banks dither around and ultimately push properties into foreclosure knowing that they will ultimately be bailed out by Fannie Mae, Freddie Mac, HUD, VA, etc. The bill ultimately gets stuck on tax payers who pay for the bailout of these mortgage loans. Meanwhile, the banks flout the law and grant unconscionable bonus to employees who more or less committed securities fraud in selling bundled mortgages as securities. But the transgressions of the big banks do not stop there. A piece on The Daily Beast looks at some of the other fraudulent and arguably illegal gambits of the big banks. What's truly upsetting is that few of the big fish have been held accountable or suffered serious consequences. Instead, prosecutions focus on petty ante loan fraud cases while the wrong doers who committed massive misdeeds and put the economy in the toilet continue to live the good life. Here are some column highlights:

Here’s a taste of the deadliest sins committed by the banks, followed by a full account of all the gory details at each bank. Warning: It isn’t pretty

1. JPMorgan Chase kicks 54 military families out of their homes—despite a law against doing so.

3. Citigroup, Bank of America, and Goldman Sachs all pay huge fines to settle charges they duped their own clients.

4. Goldman Sachs assists in Europe’s economic collapse by helping Greece mask the truth about its finances.

7. Despite these and other unpardonable sins, banks showers tens of millions of dollars in bonus money on top executives.

Where to start? JP MORGAN CHASE

There’s the $211 million fine JPMorgan paid in July to settle charges that it defrauded local governments in 31 states—along with the $130 million it returned to municipalities it was accused of duping.

There’s the $722 million in fines and restitution payments it made after JPMorgan confederates were caught paying off officials in Jefferson County, Alabama (home to Birmingham), to secure a municipal finance deal that nearly bankrupted the county.

There’s the fact the bank was in so great a rush to evict people from their homes that it admits that some of its people might have forged foreclosure documents—a problem so widespread that it felt compelled to suspend 56,000 foreclosures while it investigated its own behavior.

WELLS FARGO Wells might seem small, at least when compared to giants like JPMorgan or Bank of America, and therefore not as worthy of revulsion as the other big boy banks, but then looks are deceiving. Wells is the country’s second largest bank in terms of deposits and its stock is valued at more than that of JPMorgan Chase, Citi, Bank of America, or Goldman Sachs. It’s also the bank with the most shameful record on race.

CITIGROUP The sins of Citi start with Sandy Weill—the perfect poster boy for the subprime era. It was in 1986 that Weill, then a 53-year-old Wall Street castoff looking for his next act, bought a mangy, third-rate lender called Commercial Credit. You’re buying a loan shark, his otherwise loyal personal assistant said of this chain of storefront lenders in the business of gouging working-class customers looking for financing on small purchases like refrigerators and bedroom sets. But Weill saw its potential, aggressively moving Commercial Credit into subprime mortgages and then using the profits to go on a buying spree. A dozen years later, he merged his company with Citibank and took over as co-CEO.


It wasn’t just the origination of subprime home loans that drove profits. Like JPMorgan Chase and other goliaths born with the end of Glass-Steagall, Citi played the securitization game as well. The bank wrangled more than $20 billion in mortgage-backed deals in 2006 alone. On October 19, Citi agreed to pay $285 million (without denying or admitting guilt) to settle a complaint filed by the SEC charging that the bank had defrauded its own clients by selling them shares in a rigged mortgage-backed security. It was just another slap on the wrist, really, given that two days earlier, the bank reported profits of $4 billion in the year’s third quarter.

BANK OF AMERICA Bank of America was the first major bank to get into the subprime-mortgage business when it purchased a multibillion-dollar subprime lender in 1992 (it bought a second huge player several years later). Its employees have as much explaining to do as any bank about the "robo-signing" scandal—which saw bank employees swearing they had done the necessary due diligence to prove the bank had the right to seize an individual’s home, when they had not. During a deposition, for instance, one Bank of America employee asked how she could be expected to actually look over the paperwork when she was signing 7,000 to 8,000 foreclosure documents per month.

Customers of all the big banks complain that being behind on your payments means a Kafkaesque journey through a maze where straight answers are impossible to come by and the odds are high that you’ll need to send in your paperwork several times before the right person actually receives it. Still, Bank of America distinguishes itself even among this crowd. A study by Moody’s released at the end of last year found that Bank of America took longer than any of the other major banks to resolve a delinquent loan. And data from HAMP, the program the Obama administration set up to help homeowners avoid foreclosure, shows that Bank of America has the highest number of customers eligible for a loan modification under HAMP—but the lowest rate of success: it provided loan modifications to fewer than one in three homeowners eligible for the program.

Personally, I moved my accounts from Bank of America a number of years ago during my hostile divorce and related bankruptcy. B of A's idea of "helping you" proved to be little better than consenting to being gang raped. As a consequence, I managed to have my accounts with them discharged. It is truly tragic that institutions that helped create the nation's economic collapse continue to go unpunished and get bail outs while hard working Americans who have suffered job loss, medical bill catastrophes, and other legitimate hardships continue to get shafted with no relief from the government.
Posted by Michael-in-Norfolk at Wednesday, October 26, 2011