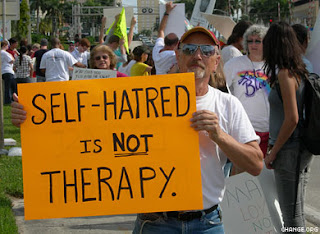 I've noted many times before the genesis of Warren Thrickmorton's move from rabid supporter of the sexuality is a "choice" lie to one who now questions and exposes the flaws of the reparative therapy crowd, I still don't know what has prompted the change of heart - maybe a desire to keep his professional license - but whatever the cause Throckmorton has been doing a good job at cutting his former compatriots off at the knees. Add to that the recent recanting of "change" by former ex-gay ministry leaders and things have not been good of late for the self-enriching professional Christians and quacks like Marcus "Marcia" Bachmann who profit off of the desperation of the religiously brainwashed. As more and more exposes of the falsity of the choice myth and change myth come out, one can only hope even the sleaziest of politicians will in time find that giving political fellatio to the ex-gay crowd is simply too toxic. One such development is that in a recent post on his blog, Throckmorton examines the fringe nature of NARTH and the paucity of mental health professionals within its ranks. Indeed, the majority of its members are professional Christians and their hangers on. Here are some highlights:

Last week, the Family Research Council promoted the annual conference of the National Association for the Research and Therapy of Homosexuality, touting the group as “one of the best sources of information about homosexuality.” In the description of NARTH, the FRC claimed that NARTH is “primarily composed of psychiatrists, psychologists, and other professional therapists and counselors who offer ‘sexual reorientation therapy’ to help people overcome unwanted same-sex attractions.”

However, this is not accurate. NARTH is not composed primarily of mental health professionals. Actually, according to NARTH’s operations director, David Pruden, only about 250 of NARTH’s approximately 1000 members are mental health professionals. . . . the lion’s share of NARTH’s members consist of lay people, ministers, and activists who have an interest in the materials provided by NARTH but are not scientists or therapists.

Given the fact that 75% of the members have no professional or scientific credentials, it seems more accurate to consider NARTH to be an advocacy group with some like-minded mental health professionals as members, rather than a scientific group. This impression is reinforced by the fact that two prime speakers at next week’s convention in Phoenix are not scientists at all, but anti-gay activists.

Ouch! This reality is underscored by the recent recanting of his "change" by a former leader of "ex-gay" conversion "ministries" as reported by Religion Dispatches. Added to that was backsliding by a leader of Exodus International. Here are some excerpts:

While many are understandably celebrating the stunning reversal of John Smid, former head of the ex-gay ministry “Love in Action” (and, to a lesser degree the softening of Alan Chambers of Exodus International), the truth is, very little is likely to change unless they put their weight behind the existing movements for equality.

Smid, who showed up on Hardball recently, admits that homosexuality ”cannot be repented of! People are, or they are not, homosexual… One cannot repent of something that is unchangeable.”

Although Chambers’ change of heart isn’t quite as compelling as Smid’s he was able to admit that he was wrong in his criticism and that he gives his “full support for what is the heart of their campaign—encouraging LGBT teens to choose life.” By which he means that, “Regardless of where someone falls on the debate over sexuality, I hope we can all agree to move the issue of bullying and suicide, especially where kids are concerned, to a non-polarized, non-politicized and non-divisive issue.”

What would make these sympathetic overtures really ring true, however, would be to see Smid and Chambers put their weight behind the movement to fully include LGBT people in the church—something they’re unlikely to do anytime soon.

Posted by Michael-in-Norfolk at Tuesday, October 25, 2011

Michael, posts such as this one are always good news. Thanks for the info.