UPDATED: Beneath the chart I have set out some highlights from a related column in the New York Times. I find it extremely disturbing to see the direction in which this nation is headed. Again, the facts disclose the utter hypocrisy and toxicity of the Christianist/Tea Party/Republican version of Christianity which now seems best defined by unbridled greed and hatred of others.

I am not one to advocate handouts to the lazy and shiftless. That said, I do believe in helping those in need, including the poor and hungry and the ill. Moreover, with one of the nation's main political parties wearing Christianity on its sleeve almost incessantly, one would expect that the USA would stack up decently on a measure of the social justice available to it's citizens. As the chart below (click the images to enlarge them) from the New York Times reveals, that expectation would be sadly mistaken. Indeed, it is the policies advocated by the quasi-religious party a/k/a the Republican Party and its adherents that bear much of the responsibility for the USA's pathetic score. The disconnect between the feigned religious belief of the far right and their actual adherence to Christ's message could not be more stark. The fact that supposedly far less religious nations score far better that America is nothing less than an indictment of conservative Christians and the political whore in the GOP. 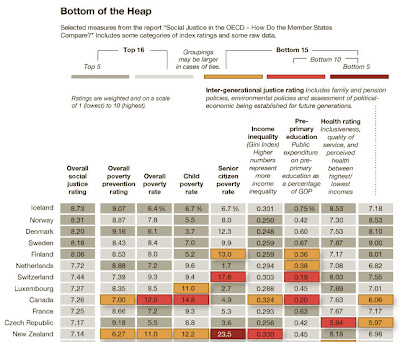 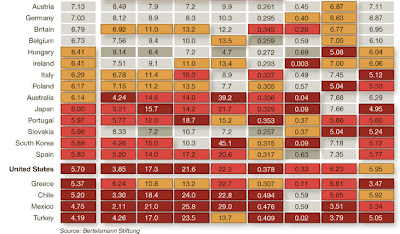 We are slowly — and painfully — being forced to realize that we are no longer the America of our imaginations. Our greatness was not enshrined. Being a world leader is less about destiny than focused determination, and it is there that we have faltered.

We sold ourselves a pipe dream that everyone could get rich and no one would get hurt — a pipe dream that exploded like a pipe bomb when the already-rich grabbed for all the gold; when they used their fortunes to influence government and gain favors and protection; when everyone else was left to scrounge around their ankles in hopes that a few coins would fall.

We have not taken care of the least among us. We have allowed a revolting level of income inequality to develop. We have watched as millions of our fellow countrymen have fallen into poverty. And we have done a poor job of educating our children and now threaten to leave them a country that is a shell of its former self. We should be ashamed.
Poor policies and poor choices have led to exceedingly poor outcomes. Our societal chickens have come home to roost.

This was underscored in a report released on Thursday by the Bertelsmann Stiftung foundation of Germany entitled “Social Justice in the OECD — How Do the Member States Compare?” It analyzed some metrics of basic fairness and equality among Organization for Economic Co-operation and Development countries and ranked America among the ones at the bottom.

Among the damning finds on the USA, 21.6 percent of America children are affected by poverty. In contrast that figure is 3.7 percent in Denmark. The Christian Right can bad mouth "old Europe" all they want, but the truth is secularized Europe does a far better job at applying Christ's Gospel message to public policy than the falsely pious in the USA.
Posted by Michael-in-Norfolk at Saturday, October 29, 2011

maybe this will wake up some people and realize what a load of crud the republicans are feeding them. if ever there was a time for a third party to be able to get voted in across the country, tis now. no one is really happy with either party and their views on things. so if say the libertarian party actually found a candidate that wasnt a crack pot, or had some sort of heft to them, they could do some damage to the status quo. tis about time and long past due.