Who Is Responsible for Destroying the Republican Brand? 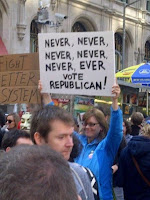 I take some degree of grief at times from readers for my - in my view, justified - pummeling of today's Republican Party for its many moral failings not to mention off the charts hypocrisy. Being critical of the GOP doesn't mean I'm in love with the Democrats, merely that if one has to pick from one of two evils, then the Christianist/Tea Party controlled greed loving GOP is the worse of the two evils. And it's the GOP which has worked to to destroy itself and make it increasingly impossible for rational, thinking, non-religious extremists and non-greed driven individuals to want anything to do with the GOP brand. As I have noted many times, once upon a time I was a Republican in an era when before the Party has degenerated into something foul. The Democrats did not do this to the GOP, the GOP leadership did it by catering to religious extremists, the Tea Party and selling out the middle class. David Frum, one of the shrinking group of rational conservatives looks at this phenomenon on his blog. Here are some highlights:

Voters say the darndest things! The identification of the GOP as mouthpiece for the selfish interests of the wealthy is a stubborn image, difficult to overcome at the best of times. For three years, however, Republican leaders have been doing their utmost to confirm the stereotype – and to quash and quell any attempt to counter that stereotype. Did we really spend months and months arguing that one of the things most wrong with the US tax code is that the poor and unemployed pay too little tax? Yes we did. Head shake. Face slap.

Given the terrible economic fundamentals, this reckless self-branding by Republicans may not in the end be enough to save President Obama from himself. But if he does manage to eke it out, the CBS/NYT result is the beginning of wisdom as to how and why.